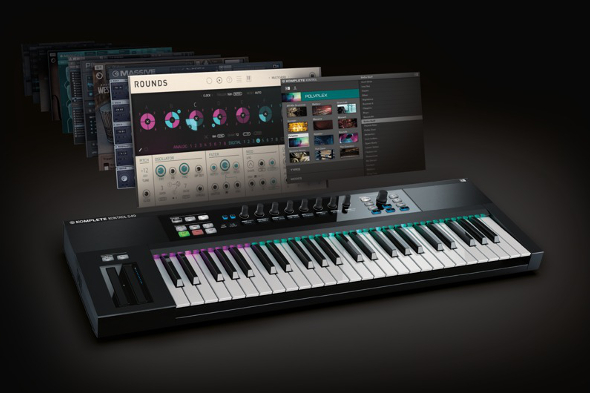 The next version of the company’s flagship software bundle is joined by a new line of keyboard controllers.

The tenth version of Native Instruments’ exhaustive software and effects bundle will once again available in 130 GB standard and 440 GB Ultimate versions, with 39 products included in the former and 75 in the latter. Both versions feature three new Reaktor-based instruments in the form of Rounds, Kontour and Polyplex, and the Definitive Piano Collection, containing three multi-sampled pianos for use with Kontakt.

However, the big news is that Komplete 10 is being released alongside a new range of keyboard controllers from Native Instruments called the Kontrol S-Series. Available in 25, 49 and 61-key varieties, the S-Series will provide native mapping for each Komplete instrument as well as easy browsing, and has a feature called Light Guide, which uses coloured LEDs to provide performance feedback for arpeggios, scales and chords. Each model also boasts touch strips for sound warping, as well as the ability to let users play chords with single keys, and map the entire keyboard to musical scales. Those wishing to see its features in action can do so via the video below.