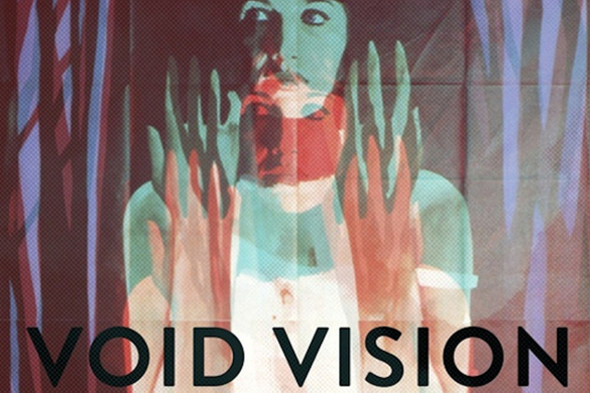 Void Vision appeared from the murky filigree of 2010 in which we kept getting great records from the States and wondered what on earth was happening over the Atlantic. You may even recall an article in the Guardian (!) attempting to figure out some sort of socio-cultural background to what appeared to be a New York-based revival of an extremely European death-drive. At the time Void Vision were just another duo from the Wierd scene. They released In Twenty Years on Blind Prophet – a strong, nightmarish tune – and disappeared back into the darkness they came from. After a forgettable split with Vice Device last year, it seems Void Vision – now a solo female artist, and swept up by the more muscular ways of Mannequin Records – might finally have her time. 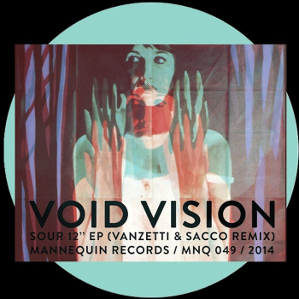 Sour precedes a full LP with Mannequin later in the year, and it’s title track is actually an old song which the band were playing as early as 2009 but didn’t release – presumably because they were priviliging their darker, heavier stuff. It’s effectively a pop song; packaged and produced differently, it could even have some sort of post-80s mainstream appeal. It seems Alessandro Adriani, Mannequin’s founder, may have ‘italianised’ Void Vision’s place as an artist: “Sour” may not be the kind of goth-soaked track that Void Vision initially wanted to stand for, but why not dwell in the lighter shades of life? Released with a fabulous mix, in summer, on aqua vinyl it does its job splendidly.

The record is great. Don’t get me wrong, there’s nothing particularly special about it: it just does what it needs to do really, really well. Profoundly danceable, naively melodic, kind of flashy and kind of erotic, it has that silvery feminine sound that The Frozen Autumn’s side project Static Movement used to have – there’s no obsession for sophistication, no fixation for depth, and the record’s all the better for it. Apart from this background of Italian melancholia, the record carries something almost electroclashy about it – think Paris circa 2003. Perhaps it’s the polished synths, perhaps it’s the sexified female voice, perhaps it’s the predictable beat – although that may all sound extremely plasticky, paradoxically there’s something less ‘fake’ about this record compared with VV’s previous releases: it’s more liberated, less manneristic.

A different kind of pleasure is found in the Vanzetti & Sacco mix. As the name suggests (two Italian anarchists arrested in America in the 1920s… in fact, it’s the guys from Bordello a Parigi), the mix extracts the Italo core of an American track and unashamedly intensifies its easier, dancier aspects. The beat gets more violent, the synths even shinier, the whole thing loses its silvery complexity to a rounder, more macho sonority. Though perhaps less electrifying than the original mix with its hammering drum machine, there’s something about the Vanzetti & Sacco version which concentrates the track, like a good tomato sauce.

Proceedings close on “20/20”, much more reminiscent of earlier Void Vision stuff; a neurotic, complex science-fiction instrumental which is a welcome electric blue after all that aqua. It haunts, just to remind you that actually, a grey September’s round the corner (and hopefully so is a great album). The record is an excellent introduction to Void Vision’s new life – it’s an ephemeral pleasure, but in the best sense. We’ll probably forget about it, but while we love it we’ll love it madly.