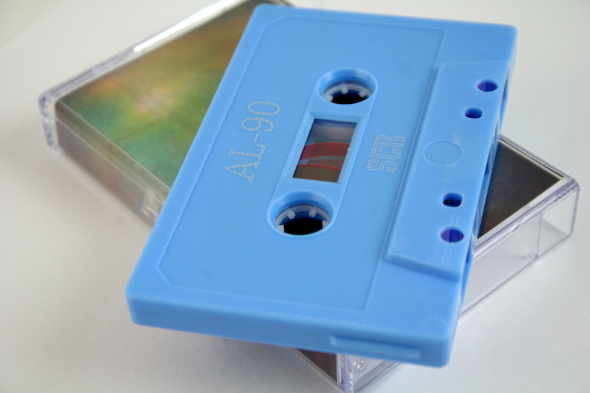 Reckno, the label run by Chris Catlin and Peter St. John, has been one of the most prolific of all entries into the lo-fi cassette melee, although with its first releases reaching back to 2009, the pair arguably foreshadowed the current explosion even as their output has ramped up to reflect a flourishing interest in the wares they have to offer. The latest release on the label concerns itself with a hitherto unknown talent dealing in fringe electronica robbed of all airs and graces, all executed under the thoroughly cassette-friendly pseudonym AL-90.

There’s no doubt that the music on SCR is purpose-made for tape, as a plethora of warbles and warps will have you pondering whether it’s the production or the medium that has degraded, especially on the wildly detuning “On The Surface”, but it’s not a stylistic trait employed to excess. More so the overall tone of the album comes on like a noirish soundtrack to an ‘80s thriller, packing as much VHS charm as C90 crust into the cloying billows of synths.

There are whispers of hip hop influence on tracks such as “Wiretapping”, which lurches in a downtempo funk fashioned out of bits of old machinery, and likewise “Martin Eden Broadcast” has plenty of repurposed choral tones going on amidst the smudged out beat, culminating a distinctive Wu-Tang flavour. More than that though, the symphonic compositions are what makes SCR a captivating listen. From sweeping romantic vistas to claustrophobic unease, the harmonies and arrangements are far more developed than many who choose to take the roughshod approach to production. “She Would Become Wet” in particular tugs at the heart strings with its achingly beautiful piano and string combinations, offset by a wistful bluesy vocal hum that strengthens the emotional impact even further.

The album highlight though is surely “Brain Damage”, which channels AL-90’s melodic skills into the murkiest, most nerve-tingling horror show imaginable. A funereal kick pulses quietly underneath, while discordant keys call out in vain hope against the colossal tide of the shapeless drone notes. As subtle samples and licks fumble their way in, the track constantly wows and flutters, not allowing anything to break the uncomfortable momentum.

In “Brain Damage”, as in many places on the album, there is plenty of space given to contrasting elements. You can hear between the folds of overbearing texture that there is a hopeful lilt to many of the samples, and yet their treatment and placement in the mix don’t allow them to break the dread-filled ambience, instead fuelling it further with their clashing motives.

In that tension between different musical sources AL-90 has found the perfect recipe for arresting electronic music. There is an overriding theme of melancholic fluff-on-the-cassette-head reflection, but it’s a theme empowered by the many different kinds of sounds woven into it. If you need further proof, delve into the nightmarish pop of “Paul Hares – Universe (rmx)”, where radio-friendly soul meets with sounds from the abyss. In such contortions truly magic music can be created.