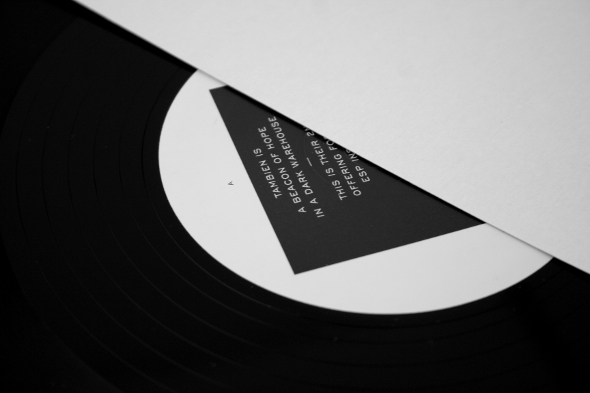 If you were turned on to the work of Tambien by their last (and widely applauded) single for ESP Institute, there’s a good chance that you have a taste for the unusual in house and techno. Likewise such a taste probably stands you in good stead to embrace the switch up in style that comes with their second release on Lovefingers label, where the scratchy grunge of disheveled breakbeats and distorted synths have been usurped by lighter, more fluid elements. This is not to say that the emergent trio from Munich have completely upended their style, but rather that the overall mood exists in an entirely different head space to the “Drogato”/ “Dois” release, or even the tribal thrum and nutty sonics of their last EP on Public Possession. 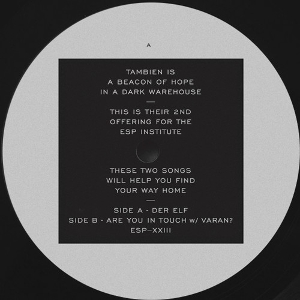 “Der Elf” is certainly still powered by the steady beat of a drum machine that intones a lazy but purposeful groove accented by offbeat snares, but it’s merely a vessel upon which the rich spread of melodic content can drape itself. This starts off in a manner which feels in keeping with the Tambien approach thus far, as a reversed and staggered female vocal shudders and quivers in a disorientating manner; so far, so strange. However, it doesn’t take long for a synth string hit to work its way into the fold, and the effect it has can’t be understated. With additional vocal touches rounding out the harmony, there is a decidedly melodic purpose to this track which only builds as the rhythmic undercarriage rolls on unabated.

While the feel of the “Der Elf” is still loose and natural (one of the great appeals of the Tambien material), there is not even a touch of distortion present here, and in the climax of the track the dramatic pitch bends on the strings and extra key flourishes extol a certain 80s charm that places the group in a whole new light.

This fresh notion of tangible, direct melodic content is continued on “Are You In Touch (with Varan)”, which begins with nothing but a resonating chord line. With a longer running time of over nine minutes there’s a little more space for the track to take shape, which it dutifully does with plenty of pleasingly cosmic effects drifting unhurriedly around the mix. There is a gentle kick pattern buffeting proceedings along, but largely the first half of the track unfolds in a pleasant ambience until an unexpected vinyl spin back just shy of the five-minute mark. Then comes the hook of the track, some achingly stark and sweet chimes that throw a Balearic curve into the mix. So delicate are the surroundings, a light splash of reverb gives these simple notes an emotional weight that rounds out the track magnificently.

What Tambien have proved with this release is that they aren’t just getting lucky with a funky drum machine groove and a bit of grainy sonic decoration, but rather that there is a sizable amount of skill and sensitivity guiding their studio work. Of course the earlier singles already suggested that fact in between the layers of grit, but here the musicality and subtlety of the trio is laid out for all to see, and the two resulting tracks are as magnificent as anything that came before them. It only bodes exciting things for the future from the Public Possession posse.