Rob Lee investigates the new update to M-Audio’s classic Trigger Finger unit to find out where it fits in the current production landscape.

While the inspiration for M-Audio’s original Trigger Finger controller probably had its roots in the MPC samplers that first hit the shelves in the late 1980s and early 1990s, after they created a controller for use with computers with pads, knobs, sliders and dials specifically aimed at beat makers, it seems as if their competition took up the gauntlet and ran with it. Now we live in a world where MPC Renaissance, the Native Instruments Maschine and Ableton Live’s Push controllers have finally joined the dots between solid hardware control and innovative music production software, and it‘s this changed landscape that the all new Trigger Finger Pro finds itself.

The hardware itself features 16 coloured velocity and pressure sensitive pads, four faders, four knobs, a push encoder, a step sequencer and a plethora of function and navigation buttons to help you navigate the digital display. The brains of the Trigger Finger Pro comes in the form of a clever piece of software called Arsenal that features a virtual drum module, Hybrid 3.0 synthesizer and over 8GB of expansion packs from institutions such as Toolroom Records. The hardware is powered by USB bus power, but if you want to use it as a standalone MIDI controller with the aid of the software or multiple DAW presets, it also features a port for a power adapter. The unit has a sturdy feel to it, with a three position detachable stand angling the brushed aluminium face plate towards you. Although there is a slightly plastic feel to the controls, they are constructed well with no wobble on any of the knobs and only a slight sideways movement on the faders. 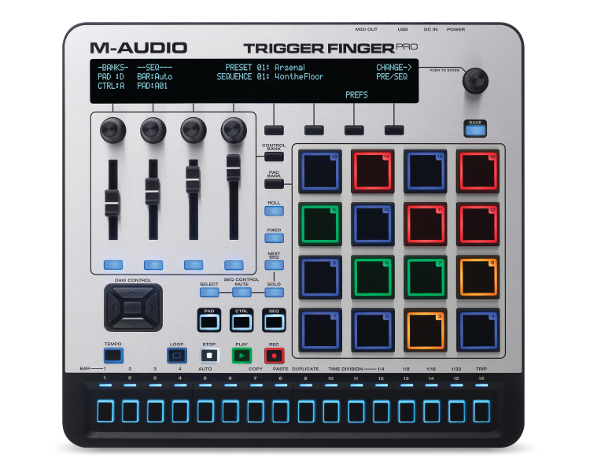 The workflow makes use of three main modes; pad, controller and sequencer modes. Before you can start experimenting however, you will need to assign sounds to the pads. Although there is a display to help you keep your eyes away from your computer like the Native Instruments Maschine, there are quite a few instances where you find yourself diving for the mouse and assigning kits and sounds to the four banks. Each pad is a track on the step sequencer, and with four banks there is a large count of 64 tracks that can be sequenced at any time. Though getting to grips with assigning each bank is a little frustrating at first, the results that can be achieved after you have become fluent with the workflow is impressive.

The hardware’s straightforward sequencer lends itself to the hands on approach, programmed either by real time recording or writing inputs into the sequencer via write buttons that light up to indicate the status of each step. The length of your sequence (up to four bars) as well as other details – such as the velocity of each step – can be controlled directly from the hardware. Switching between different banks mid-sequence and having pre-assigned knob and fader controls using the MIDI learn feature allows you to get a high level of performance into your sequences, and with the solo, mute pad and mute bank options available, it’s possible to perform some quite convincing arrangements. If there is a gripe about the the Trigger Finger Pro, it comes from the minimal effect options available in the virtual drum synthesiser, as well as the fact that they can’t be assigned directly from the hardware itself. However, with a bit of planning, preparation with a DAW and some choice plug-ins, it’s possible to map some simple sends using the control section of the hardware. 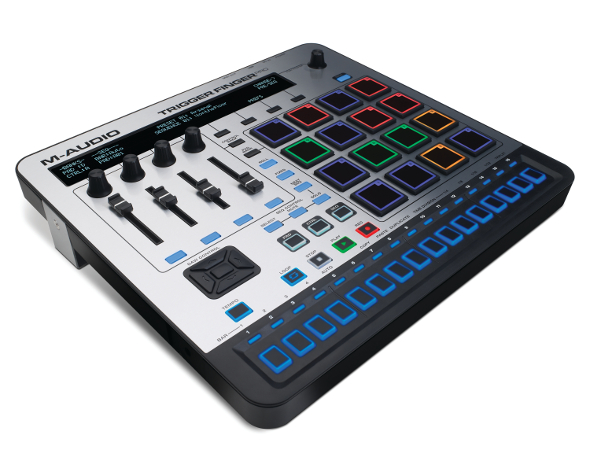 In line with the current offerings in the controller market, the Trigger Finger Pro comes with features like multi-coloured RGB backlit pads, which it needs to compete with the likes of Ableton’s Push and Native Instruments Maschine. In comparing the build quality of the three, the Trigger Finger Pro is left slightly wanting, but it is less than half the price of Maschine and a cheaper option than Push. It’s perhaps Ableton users looking for a cheaper alternative to Push that will be most interested in the Trigger Finger Pro, with a fast workflow that lends itself to use within the Ableton Live environment. It also allows the hosting of various plug-ins through the Arsenal software, allowing you to browse your sound options in a more efficient way.

There’s no getting around the fact that the Trigger Finger Pro lacks some of the shine of its higher profile competitors.However, if you are a DJ looking to make the leap into production, but can’t afford the more expensive hybrid controller/software options, then the Trigger Finger Pro is the ideal candidate for getting you comfortable with the basics, with plenty of features to help you develop your own production style once you become familiar with its easy to learn environment.