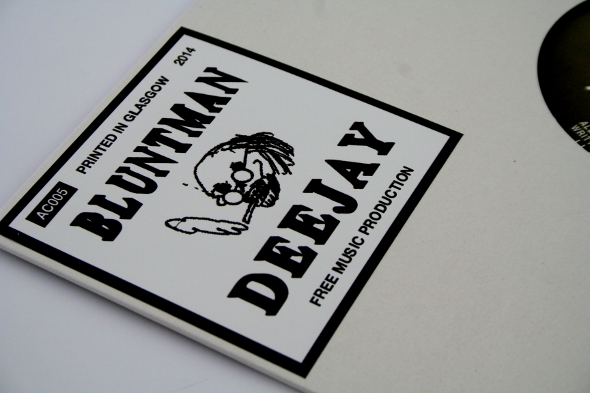 Bluntman Deejay exemplifies the word “esoteric”, that is, intended for or likely to be understood by only a small number of people with a specialised interest. This could be true for the whole universe of Vancouver’s Mood Hut label, within which the anonymous producer also operates as part of the Dream Carpets and Aquarian Foundation monikers – perhaps he’s the totality of both of them, maybe just a member of a vast collective. Either way, Mood Hut’s aesthetic is another thing that could be described as esoteric – shaky line-drawings of stick figures playing Microsoft Word clip art, ying yang signs with weed leaves interwoven in the centre, and album art that seamlessly mimics basement-bargain house jams from the mid ’90s have all become defining characteristics of the label. 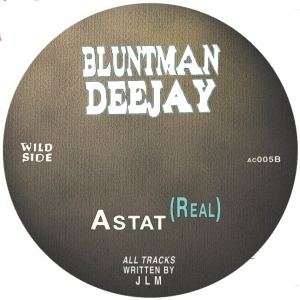 All Caps, conversely, has largely made a name for itself through an absence of design – there’s no aesthetic flashiness to the Glasgow-based label, but its first four releases have served their purpose functionally, creating incredibly searing DJ tools from the likes of Kowton and DJ Guy. Now, Bluntman’s first outing on All Caps imports a healthy nugget of Vancouver’s foggy stoner-house, while ambiguously playing with the form in a way that recalls Joe’s knack for inventive percussion patterns, and Levon Vincent’s penchant for droney repetition. Anyone who witnessed the recent Mood Hut takeover on Boiler Room knows that the label isn’t concerned with banging out all the club hits of the day in blazing succession. Instead, the label’s modus operandi seems based around creating a comfortable ambience allowing tracks to slowly seep in and permeate – it’s absolutely the case with Esoteric (Real), and it’s nice to see that laid back ambient influence seeping into the pores of All Caps.

A-Side “Esoteric Communion” seemingly takes its name from a website of Arabic gnosticism. “Today no one alive with any remnant of sensibility in his soul can deny the finality of our era” the site’s homepage reads. “We all know that the end is at hand and we all know that man, us, that is you and me, are all called upon to make a final attempt to avert the drastic character of this finality.” Bluntman’s take on things is notably less doomy, but still wrapped in a layer of mystic unease. Starting as a series of hanging piano fragments that reverberate around the vast, vacuous space of the track, it’s accompanied by little else than a drum machine keeping time for the first several minutes, but begins piecing itself together organically.

This writer was reminded of the dubby oscillations of Vincent’s “Revs/Costs” on first listen, but just as the track reaches its zenith at the eight minute mark, it cuts to nothingness. Compared to previous All Caps releases like Helix’s blistering “Stacks Riddim” or Kowton’s knowingly-titled “TFB” (total f#cking banger), “Communion”  may seem slender or lacking on first listen. But throw it into a mix, and its keys work wonders in softening the two tracks sandwiching it.

B-Side “Astat (Real)” employs a more immediate punchiness, with percussion that sounds like a stripped down version of some minimalist revision of Missy Elliot’s “Pass That Dutch”, and a fever-dream toy organ playing in a mesmerising loop. Interrupted halfway through by the sound of some kind of wheeze-inducing substance being inhaled (much in the same way that a Lil’ Louis track might employ sultry female sex sounds), the remainder gels all the elements presented in the first half together in a more urgent, tightly-strung together fashion, moving so quickly that the drumbeats almost seem to stutter and trip over themselves as they near the track’s climax.

A1. Esoteric Communion
B1. Astat (Real)