Scientific Dreamz of U – Visionz Of An Abstract Plane 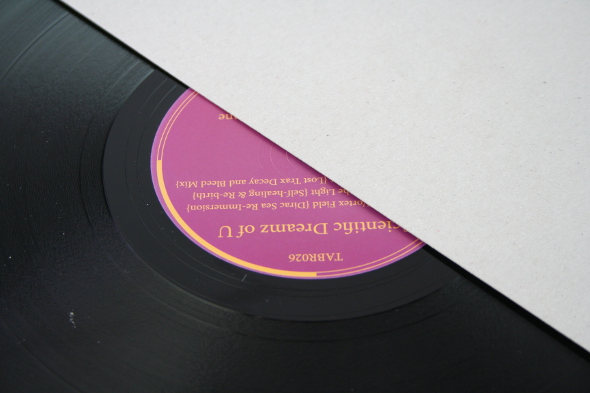 Not content with launching the anonymous artist-focused Head Front Panel sub-label, Tabernacle have recruited Scientific Dreamz of U for a release on the mothership. The mysterious act has only one previous release to its credit, but is starting to carve out a niche with its tripped out, epic techno jams. The combination of the artist’s name and track titles like “Monopole Vortex Field {Dirac Sea Re-Immersion]” scream the word ‘trance’ at this reviewer. Mind you, it’s trance with a small ‘t’. This is not the soundtrack for tie-dye wearing trustafarians or ancient guitar heroes who got on one at a full moon party and never looked back, but rather a version of that sound that explores a far darker, menacing place. The aforementioned “Monopole Vortex Field {Dirac Sea Re-Immersion]” is close to twelve minutes of throbbing, seething menace, a teased out, gurgling acid groove providing the backing reverberating drums, mesmerising and foreboding synth sequences and otherworldly samples. If it was designed to soundtrack an out of body experience, you can bet your life it’s not one that the participant will want to repeat.

Next up is “Journey in2 the Light {Self-healing & Re-birth}”, which sounds like a course you could do in a yoga centre. The reality is somewhat different.  Static noise crackles and hums as waves of acid tones are spewed over steely drums. Funereal bells ring in the background and a sombre bass snakes through the arrangement. It’s the sonic embodiment of a bad trip in five minutes. Keeping the remix duties within the roster, Tabernacle has tapped Lost Trax to remix “Journey in2 the Light {Self-healing & Re-birth}”. The label is one of a small group that this artist has released on, but his/her fans are in for a surprise. While this version starts with Lost Trax’ trademark skipping beats and atmospheric washes, midway through, it slips into the kind of grungy, heads down jam that’ll scare the life out of even the most fearless patchouli-covered trance dancer.