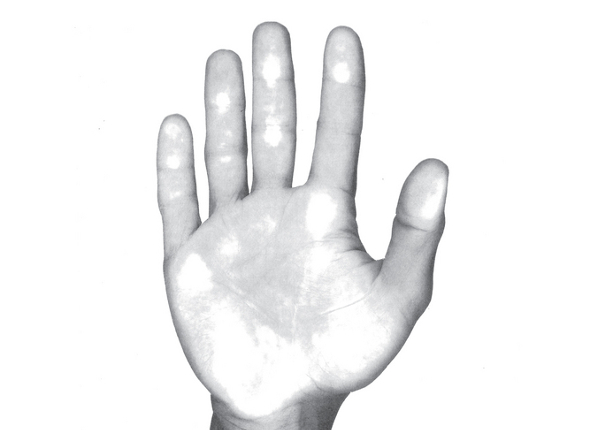 A screaming comes across the sky. It’s hard to tell whether it’s fireworks or distant explosions. People cheer – or maybe they’re yelling in panic – maybe both are happening simultaneously. The sounds that comprise “User Experience”, the second track on Neal Reinalda’s latest PHORK LP, are ones that teeter on that precarious edge between exhilaration and terror, the liminal space where celebration and city-levelling anarchy are near indistinguishable from each other. Reinalda’s work under his People’s Higher Order of Royal Kinship has often been fascinated by the contradictions coursing through Americana – song titles like “‘Shit Happens’ Bumper Sticker” and “The Spiritual Consumer” contrast capitalist excess with understated minimalism – it’s music that captures the beauty, bravado, stupidity and suffering of America. 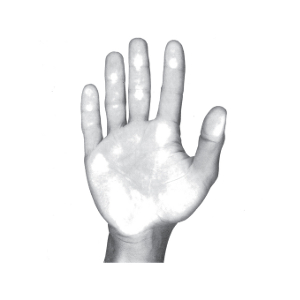 But whereas much of PHORK’s previous output seemed content to flutter in the ambient realm of blissful found-sound experimentation, High End is an exploded blister pulsing with green pus and angry heat. Here, “inhuman flatness and non-dynamics” are the concepts driving the album, accompanied by Reinalda’s vague and pessimistic press statement, in which he mockingly tells the listener “you are high-end. The most expensive of all products”. Fortunately, vitriol is a good look for Reinalda as High End manages to sustain tension, discomfort and a frenetic techno sensibility throughout its half-hour runtime, interlocking organic sounds together with dry electronica, with plenty of jarring moments inserted throughout.

“Wrecked” begins with bursts of pixelated exhalations and the sound of water dripping from leaky pipes, immediately challenging the listener to discern whether they’re listening to someone’s lusty pre-sex breathing, or the last gasps before a coma. Halfway through, an urgent, hollowed out 808 pattern takes hold, stringing the track along like Joy Orbison’s “Sicko Cell”, while a cacophony of weird voices starts repeating the track’s title. The cartoony sentiment taking hold in “Wrecked” balances out the bleakness of the first half of the track, but the two chunks combine to remain thoroughly unsettling.

“Work” finds PHORK veering from experimentalism to dancefloor stormer and back again- beginning as a sinister grumble that evolves into an MPC workout, its final minutes find found-sound noises rising up like a dust cloud and subsuming the track. In the span of a few seconds, you’re transported from the depths of a sweat-drenched club and thrown onto a crowded subway platform. “Contact” contains similar swerving shifts – while previous PHORK productions seem laboriously planned out, Reinalda whips through this album as if every track was the result of a lightning quick moment of improvisation that caught hold. As a result, “Contact” plays out like a stripped down version of a NonPlus Records track – subtleties playing over traditional techno materials.

Sure enough, “OOF” has the very same phrase as its titled inserted throughout repeatedly, stuck on rapid-repeat like an unauthorized cover of Nina Kraviz’s “Ghetto Kraviz”. But here’s where Reinalda really shines – “OOF” is tempered by this melancholy organ wail throughout, dousing the track in a layer of unexpected sadness; one of the only times throughout that you feel somewhat sad.

What’s most impressive about High End is what a cohesive musical statement it forms as a long player – almost every track seamlessly blends into the one before it without a stutter or slip up throughout, giving the whole thing the feeling of a singular, cohesive thought that it takes 30 minutes to articulate. Whether it’s intended as a scathing condemnation of capitalism, a series of meditations on loss, or just a bunch of unsettling techno excursions to be blared in dark rooms, Reinalda has strung together something that crawls under the listener’s skin impeccably.