Population One – A Mind Of His Own 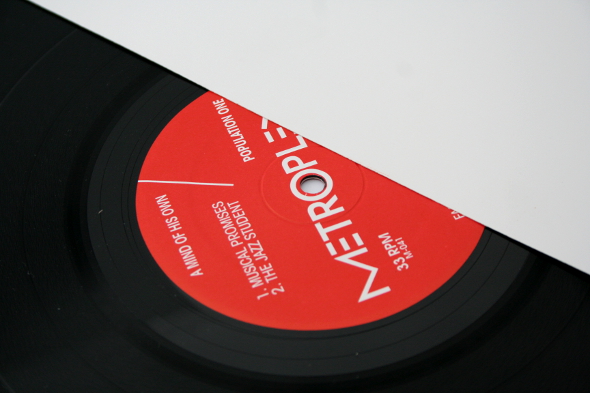 The revelation that Terrence Dixon was retiring from production with immediate effect will surely go down as one of 2014’s most lamentable moments for the techno community. If A Mind Of His Own is to be one of the last records Terrence Dixon puts out, it arrives via a rather fitting label in the newly reinvigorated Metroplex. Back in 1996, Metroplex was the first Detroit-based label to pick up on Dixon’s work as Population One after a couple of breakout releases for Claude Young’s Utensil, and the creepy minimalist strain of this guise has continued to be some of Dixon’s most compelling work. After all, it was the track “Rush Hour” from his Hippnotic Culture doublepack for Utensil that proved the inspiration for the Amsterdam-based label, record shop and distributor of the same name. 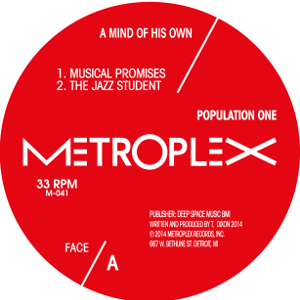 Fast forward to Dixon’s latter-day output and the series of Population One 12”s issued via his own reduction label have proved particularly enthralling to these ears, despite some stiff competition from the widely lauded long-players he’s released with Tresor and Surface Records. Nobody seems to produce queasy, abstract techno quite like Population One and A Mind Of His Own is yet another fine example, even if you are eased in and out of this alien world over the course of the four tracks.

As opening tracks go, “Musical Promises” is pretty memorable and feels like Dixon had in mind the twilight laden journeys into outer space that have informed much of Metroplex’s output over the past 25 years. There’s a real beauty in the simplicity of how the track unfolds, with the thick waves of droning chords and sludgy bass drums that form the core of the track showing Dixon at his most enveloping. This infinite wave arrives soon after skittering rain clouds of hi-hats initiate proceedings and is powerful enough to suck you up on headphones alone – quite how it affects the dancefloor is a question most self-respecting DJs should be asking themselves.

From here “The Jazz Student” pulls you into more familiar Population One territory, effectively crushing a sole queasy line of rusted keys with layer upon layer of lithe drums. Dixon retains control over a production that in less schooled hands would feel like unbridled chaos, especially when some squalling, nightmarish keys are introduced. The release of pressure that comes with a sudden upwards shift into incandescent sound as the track draws to a close is palpable.

Perhaps this closing act of respite is a calculated one from Dixon, as the B-side plunges you right back into the abstract unknown, with the somewhat bittersweetly named “Starting Over” all marauding drums and greasy, stretched and hollowed out textures that swiftly becomes a full bodied exercise in playing havoc with your day. It’s hard to describe the central motif as a melody as it’s certainly not melodious; instead it’s the sonic equivalent of trying not to succumb to the after effects of food poisoning. Closing track “Encircle” remains in Martian territory though Dixon seems less inclined to continue spoiling your day, instead focusing on a rather beguiling groove of warbling synth lines and tumbling drums augmented by some deft edits which result in the closest thing to a DJ tool on this record.