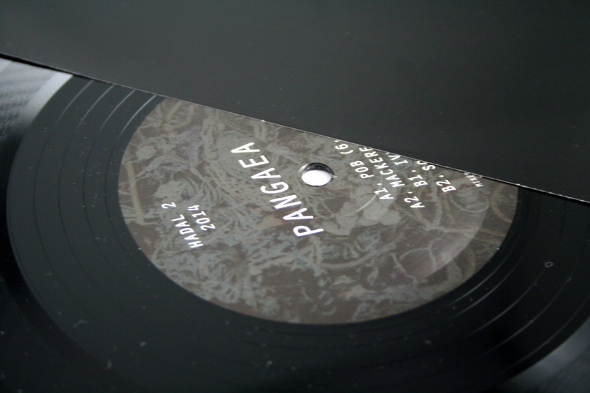 After the runaway success of his first self-released title, Pangaea fires up Hadal once again to deliver another step on in the Hessle founder’s constant audio evolution. From the delicate and mournful 2-step of old through the lurid and intensely coloured manifestations of his double-pack releases, Kevin McAuley has never rested on his laurels and so it is as he shores up on his own imprint amidst a phase of more streamlined techno concoctions. Around the release of his Fabric mix and indeed the last Hadal, McAuley was readily describing his ever-increasing love of more linear, technoid constructions, and that truly seemed to come to a head with his bulls eye 4/4 remix of Pev & Kowton’s “Vapours” on Livity Sound. 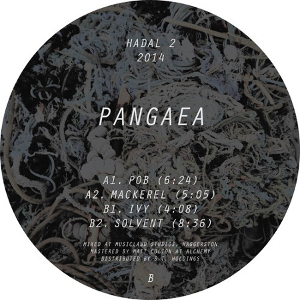 It’s no surprise then that on Pob McAuley is still enamoured with all things driving and direct, although he doesn’t stick exclusively to techno throughout these four tracks. “Ivy” in particular keeps one foot in the dubstep camp, but as ever this is a Pangaea take on genre tropes, which conjures up something entirely unimaginable before the fact of listening. The key chimes that open the track are stark and sweet in their resonating qualities, while the ragga vocal lick sounds positively raunchy in the context. Matching these delicate notes with a lurid chant is a bold juxtaposition, but the carefully deployed half-step kick that underpins the track provides the glue to hold together a positively wild idea.

“Solvent” too has some other elements at play, not least with the loping swing of the drums falling in a manner forever blighted by “Body Rock” in the early ‘00s, although it’s a grossly unfair comparison to make here as military trickles of snare roll and maddeningly intricate percussive slithers dart around the mix. Still, the bass does possess a kind of willful silliness in its utter bloated wobble, even with a techno thrust to the music. If there’s one thing to take from this, it’s that Pangaea has never been afraid of being playful even as he’s making serious music.

Even on “Pob” with its wraithlike intro and mechanical urgency, there is space for the kind of dramatic tones that could be transplanted into a hard trance track or something equally brash. The fact that instead such a sound can echo out in a spacious, patient mix completely redefines the purpose of the noise, and the effect it can have on the listener. Meanwhile the tension inherent in the track is amplified by two and a half minutes of broken beat before the 4/4 kick comes piling in and a club wrecker is born. It’s an understated drop, or in fact not even a drop, but it’s executed perfectly, and from there the track builds in miniscule stages to a thrilling climax lead by an occasionally pitch-bending bell that completes the track in fine style.

When it comes to playful elements though, “Mackerel” surely wins the day with the ravey chirpiness of the lead melodic stab. Over the straightest of all the beats on the record, and with a throbbing acid bassline underneath, it makes for a track that almost requires a double take. As ever the starkness of these elements is petered out by some trusty effects processing and a gradual blossoming of more developed melodic content, and it’s not long before “Mackerel” is awash with dubby refinement and subtle emotional twists. Either way, the track stands out amongst McAuley’s oeuvre as one of the jolliest, most accessible tracks he has ever put out. That’s not to say it’s a sunshine-ready happy clapper anthem, but in comparison to the usual murky and mystical climes he inhabits it’s positively direct.

In summary then, while there is ever more evidence of McAuley’s embrace of techno forms in his music, still he remains a slippery individual with an imaginative spark that no-one can come close to. Both “Mackerel” and “Ivy” display this in abundance; those are simply not ideas that just anyone would come up with. Hence Pangaea remains one of the most vital and interesting producers in operation in these times.