Democratising Design: An interview with Will Work For Good 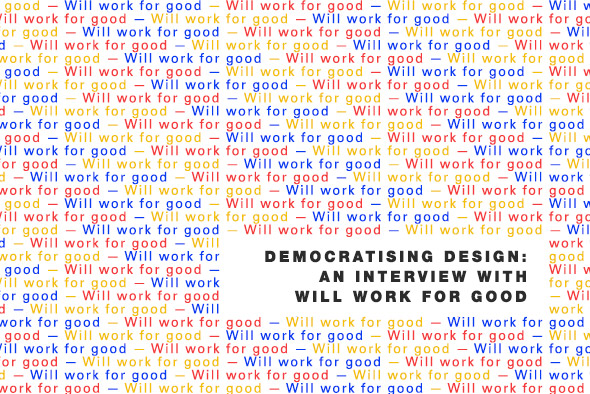 In a new series exploring the visual side of music, Emma Tucker talks with the Maastricht-based studio, Will Work For Good, on democratising good design, embracing economic limits and creating a visual framework for the likes of RVNG Intl and BIS.

Formed in 2007, Will Work For Good is comprised of duo Kevin O’Neill and Karisa Senavitis, who started WWFG with strong guiding principles that have continued to influence their scope of work. “Small scale was very important to us at the time in terms of our studio space,” they explain. “The physical dimensions of work we produced, the scope of our clients’ projects, the budgets provided, etc. We were interested in design not being so much of a privileged service and in the possibility of living off very little and working with restricted resources, which worked nicely into the following year’s financial meltdown. It lessened the blow for us, we suppose. We don’t necessarily take this same stance towards scale today.”

Forming a commitment to make design more accessible has allowed the pair to work with the people and projects they find most interesting, which includes their long-time relationship with RVNG Intl. and the affiliated Beats In Space label, as well as releases from New York’s White Columns, and work for artist Doug Aitken.

“Most of these people were financially limited, but we wanted to commit to supporting some visual articulation of their work,” the pair explain. “We also wanted to accomplish this as our main practice rather than as ‘side projects.’ We wanted to embrace these economic limits.” 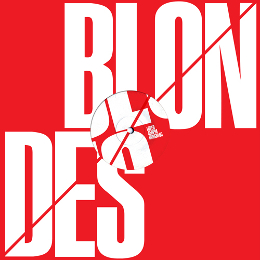 The pair’s name is a play on what they describe as “the cliché cardboard sign in the hands of the homeless on Getty Images or the like”. If that makes you feel uncomfortable, they acknowledge that while people could interpret this as offensive, it’s the economy that the signs suggest appeals to them. In fact, the duo admit to their own misgivings about the use of the word ‘good’, explaining, “the word makes us somewhat uncomfortable as it’s less a word than an entire industry. But for us, it’s not so much about the word ‘good’ as it is about the phrase ‘for good’ and its inevitable permanence, as in we will work forever. It’s very misinterpreted, which is fine and understandable. Bank tellers seem to like it though.”

Although committed to the permanence of their work the pair has been somewhat nomadic in their working habits, starting their studio in New Jersey before moving to Washington DC for two years, followed by a stint in Brooklyn and most recently relocating to Maastricht, in the Netherlands – Senavitis is a participant in a design residency at the Jan Van Eyck Academie. It’s the different experiences of locations that have played into the duo’s approach, and they explain, “if we looked back at our work I think we would see how it has evolved over time and how our studio locations and the people around us have played some part in that.”

Aside from locations, the people that WWFG have worked with have provided the studio with the most motivation, and they explain that it’s less the draw of an ‘independent label name’ that appeals to them, but the opportunity to collaborate with the associated individuals. “Really, our interest is less about records and labels than the people we are working with, like Matt Werth at RVNG or Matthew Higgs at White Columns, with whom we just recently designed a record cover and small booklet for previously unreleased recordings by Meredith Monk.” they say. “Both of them are extremely generous and brilliant people. And in their respective, but also overlapping worlds of music and art, their approaches are so thoughtful, pushing emerging and historical important work like Fierce Pussy, The Congos, Holly Herndon, Jo Spence, Kerry Leimer, etc. They’ve introduced us to really wonderful stuff.” 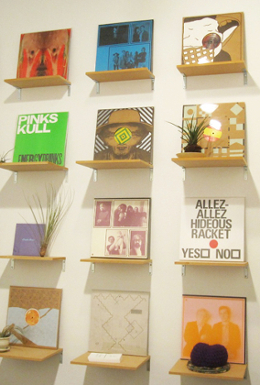 Arguably the most striking and recognisable aspect of WWFG’s portfolio is their work for RVNG, and much of their work in the music industry falls under the realm of Matt Werth’s label, in a partnership that dates back to 2003. The duo have an impressive and varied portfolio of design for RVNG, but they explain, “although it looks like we work heavily in this world, many of the releases are designed within a graphic system, so ten releases will share a single design concept (a common approach for small labels.)”

WWFG explain that RVNG is often more label-centred than artist-centred when it comes to graphic design, with most of the studio’s interactions occurring directly with the label. This sounds like something of a relief for the pair, who say, “it’s a way to make things work within the means available. If each musician/band took on the role of the ‘client’, we could never support the label in the way that we do.”

The duo see RVNG’s design language as changeable, explaining, “we never really felt that RVNG had or has a proper visual identity. It’s always kind of shifting and loose.” That said, the pair have applied a stricter approach to the label’s series releases, like FRKWYS, creating more of a rigid visual framework and consistent identity.

For the FRKWYS volumes the studio combined historic references alongside unexpected material contrasts. The first ten FRKWYS releases the pair worked on were similar to a format used by Folkways in the ’60s – a leatherette case-wrapped sleeve, with a piece of coloured paper glued to it. The pair also referenced an obscure doo-wop compilation series from the ’60s using Staten Island as the main inspiration, which had a more ‘home-grown’ feel. “We like the sort of high-end look of the leatherette diminished by the cheap one-colour printed wrap,” they say.

To further the contrast the studio used relatively banal portraits, avoiding anything overly composed, and affectionately referring to the images as ‘family photos’. “There’s definitely an awkwardness that occurs when you initiate collaboration between a younger musician with an older progenitor, which I think these sleeves capture,” the duo believe. “With the more recent ReRVNG re-issue series, we wanted to avoid facsimiles of prior covers, as these re-issues often go far beyond the usual remaster and re-release, but we’re also not interested in trying to reinterpret previous releases with new cover designs, so again we’ve created a more rigid format for these. I think in general we like to put the label in the foreground as a mind behind the releases.” 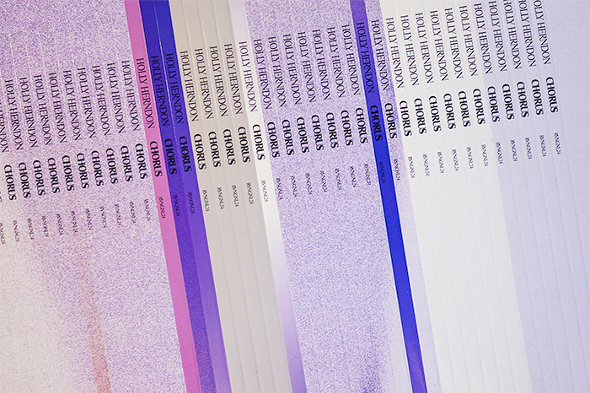 Perhaps the studio’s most striking piece for RVNG is the artwork for Holly Herndon’s Chorus, featuring a debossed cover which the pair sees as visually representative of the many layers of Herndon’s track, “Chorus”. “In our minds there are many layers to the track “Chorus” which could represent various voices, which may be Holly’s voice, the voices of YouTube/browsing habits, the voice of the overall composition, etc. Each of these elements becomes a member of the ‘chorus’ but at the same time they are all Holly’s communications. So we wanted to make a single record as if it was many records, all by Holly and all with the same title: “Chorus””. This led the pair onto the idea of sleeve artwork comprised entirely of record spines, which proved to be a challenge in terms of production. “As with most record production in the US you deal with only a handful of affordable manufacturers who will only print in Canada, meaning you are never on press and you rarely have time or money to get physical proofs. You just put your trust in these people. Sometimes it works out, other times not so much.” 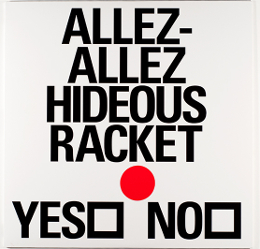 There’s also some apparently characteristic modesty in the studio’s thoughts on the Holly Herndon artwork, and the pair say, “it’s not the perfect effect but it’s the idea. We suppose this is a pretty literal design interpretation.” Obviously half the charm of the Herndon artwork lies in its tactility, but for WWFG this isn’t a novelty approach, but something to be deployed dependant on each album’s individual content. WWFG’s design for Allez-Allez’s Hideous Racket included an adhesive dot and a ‘yes’ or ‘no’ tick box on the cover, designed to influence how each listener would interact with the record, and potentially affect the owner’s own perception of value and importance. “Any means of emphasising this tactility in our minds depends on the idea,” they say. “We do think there are conventions which seem to elevate or bring greater awareness to the object or material quality, but there are also things beyond our control that do this as well.”

Aside from their work for RVNG, the studio have also collaborated with Tim Sweeney’s Beats In Space label, including working on the design for the BIS 12″ EP series, with each release featuring cover artwork by a different artist, along with an ‘art-safe violator’, in the form of a vinyl cling tear-through. Perhaps surprisingly, considering their own approach, O’Neill and Senavitis end our discussion with the revelation they don’t buy records anymore. The pair’s own experiences and attitudes revolve around a sense of interaction with the record, more so than the artwork. “There were always records that we would play constantly that would, over time, take on different tactile qualities irregardless of the cover design, or records deemed valuable that would never leave their shrink wrap or poly bag.”

All images courtesy of Will Work For Good