VernoN – Watched By The Experts 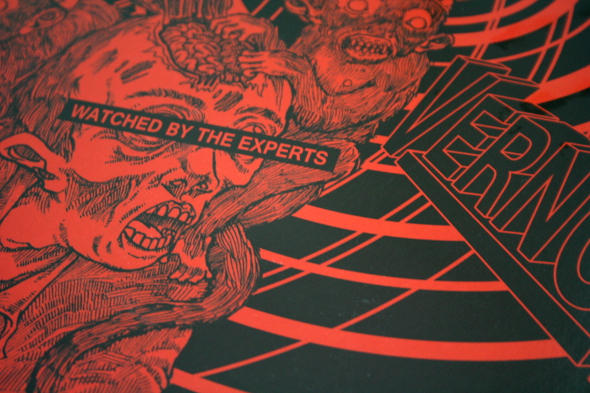 Riding the vanguard of hardware fetishism like a wild-eyed cavalier, VernoN has risen to prominence through a close allegiance to Dixon Avenue Basement Jams with a sharply executed take on acid, EBM and new beat. Now the somewhat anonymous producer has been snapped up by the ever-reliable Dublin stable Apartment Records for what is being billed as a mini LP of six forthright jackers, and it might represent their strongest material to date.
Things start off lively with the sexy 303 simmer of “Juke Joint”, which gets a frantic bass line arpeggiating underneath a strict filter while the drums impart an urgent command to move. It’s not all primal dancefloor instincts though, as the strings that linger overhead speak more to a soundtrack sensibility through strained, melancholic notes. It’s a device that has as much impact when taken out of the mix as when it lurks behind the stout rhythms. 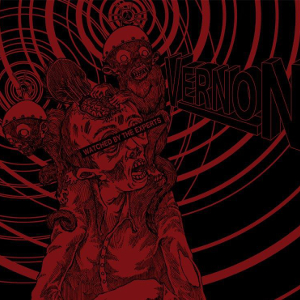 “Ocsid” brings a touch more of that distinctive flavour that has made VernoN a name worth noting, largely down to the lead synth that cavorts through the centre of the track. An upwards-slanted arpeggio of a decidedly bulbous nature, the sound is imbued with the kind of delirious excitement that makes a great track. There is a wealth of cosmic decoration that flutters around the core as well, from crystalline rivulets of melody to vaporous gases, rounding out the already full-bodied stomper. “Plastic Illusion” too boasts a hooky nature thanks to its dark and devilish piano refrain, lifted from the 80s but bolstered with the punch of now in all its dystopian glory.

The title track too takes on a dim view of the future, although instead of the direct club readiness of the former tracks there is a more slippery electro impetus at work here, with towering synths and eerie chimes taking the Hague sound and making it more cinematic. In its peaks and troughs there is still plenty of brawn to be displayed, but the rhythms fall in off beat formations that widen out the appeal of the track, while the atmosphere remains perfectly rendered in some nightmarish vision of tomorrow.

“P Brane” has a much lighter tone to it, taking on the kind of sweet machine funk that made Elecktroids and The Other People Place such compelling variations on the Drexciyan blueprint. The pads are hopeful, while the acid barks like a playful Jack Russell. That leaves it to “Infected” to bring things back to the straight-up box beats of the first side with another line in off-key melodics for the moody dancers.

At every turn you can pick out the influences that inform VernoN, but his is the kind of music that weathers such comparisons. In the long run it may never earn the artist a place in the history books, but that oversteps the fact that these are impeccably delivered machine workouts brimming with energy and guts. At its best, as on “Ocsid” and “Plastic Illusion”, VernoN brings a little edge into the work to make it stand out from other would-be-jackers, and for that reason alone the music is always worthy of a mention. As for the effectiveness in the heat of a sweaty night out, every track can more than deliver, and there’s every likelihood that is all the artist in question cares about anyway.

A1. Juke Joint
A2. Ocsid
A3. Plastic Illusion
B1. Watched By The Experts
B2. P Brane
B3. Infected