The classically trained musician will grace Function’s revived label with the Removal of the Six Armed Goddess EP.

The announcement that Dave ‘Function’ Sumner was planning to lift Infrastructure New York out of its previously dormant state represented one of the most welcome surprises for techno fans so far in 2014. Allegedly in the works for some two years, a revived Infrastructure New York made its return in style with the Odeon/Rhyl 12″ from Function and Inland, the recently adopted mantle of production pal Ed Davenport who has played an integral role in assisting the label’s comeback. With the announcement came some vague, yet promising hints of who would be involved in future Infrastructure releases with Adam X, Vatican Shadow, Dettmann and rave hero Mark Archer some of the names thrown about. However the label’s next release looks to an artist with a lot less exposure in Campbell Irvine.

Brandishing a name that sounds like a Mad Men extra, Australian-born Irvine is a classically trained violinist and recent Berlin transplant with a refreshingly sparse trail of online information behind him. The verbosely-titled Removal of the Six Armed Goddess is due for release late next month and represents Irvine’s debut release and is described as a “deeply ritualistic study in textural, layered compositions inspired by middle-eastern traditions and rhythms”. Those wishing for a taste of Irvine’s approach to techno before release can preview all three tracks below.

Infrastructure New York will release Removal of the Six Armed Goddess by Campbell Irvine on June 30. 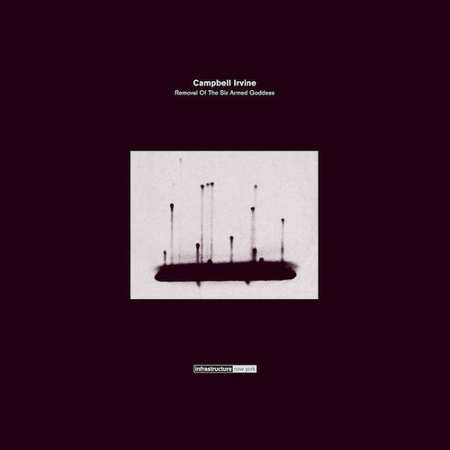