Perc – The Power And The Glory Remixed

With his debut LP still being felt reverberating in the hearts and minds of techno lovers everywhere, Perc swiftly follows it up with a fearsomely heavy remix package featuring producers with serious amounts of clout in every sense of the word. “Take Your Body Off” made for a thrilling concoction in its original form, melding the toughest industrial techno with an EBM performance that pitched frantic vocal yelps in amongst the searing beat. Tessela meanwhile does the logical thing and twists up a breakbeat revision of the track that sports his uncanny knack for slicing and dicing drum funk into unique shapes that still manage to be eminently danceable. 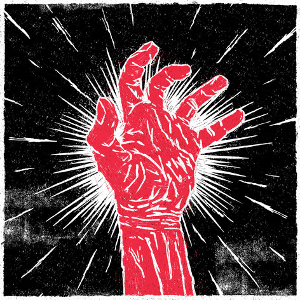 Where the likes of “Nancy’s Pantry” and “Hackney Parrot” were lairy exercises in how much one can stop and start the dance in the space of sixteen bars, this revision of Perc’s track rolls along addictively, the off-beat snare trill making for the perfect repetitive hook. There is plenty going on in the fringes of the track, as snippets of sound fritter away like the nervous edge of the drums’ own circle pit, but really this is a track focused on charging straight ahead without much need for distraction. If that A side effort felt heavy, little can prepare you for the brain-melting exercise undertaken by Untold as he takes “Bleeding Colours” to task.

Following on from his Black Light Spiral LP, the red-lining industrial tones of the original track make a perfect jump-off point for Jack Dunning to indulge his increasing love of gutter-punk electronics, and they’re on show in all their spitting, snotting glory right here. It’s apparent within the first millisecond of the track, defined by the leering bass that dominates the mix. It’s a truly remarkable sound, masterfully distorted and yet utterly realised in its finish. Following on from the one monotonous note, the real thrill in the track comes when the bass switches key and starts throwing its weight around. Over the surprisingly funky soca-esque drum rhythm, it’s hard to imagine any club reacting indifferently to this track. From inspiring violently unimpressed complaints in those not of a noisy disposition to full-on body slamming abandon for those with a few punk roots to tap into, this is music that demands attention either way.

After all that sweaty madness, Clouds remix of “Dumpster” comes on like something of a breather, and that wouldn’t be the case in many instances. With leaden, crunchy breaks as the rhythmic ballast, the Scottish duo keep in with the gritty nature of Perc and the remixes he inspires, but there’s still room for some atmospheric tones and pads to come in. That they’re still wincing under an unrepentant amount of distortion tells you what kind of results Perc’s music inspires.

Indeed, coming from three different sources what really shines through is how powerful Ali Wells’ source material is, to push three (admittedly wisely chosen) producers to delve into their most malevolent, noise-loving facets and thus make for an immaculately pitched addendum to his album. One can only imagine he’s very satisfied with such results.

A1. Take Your Body Off (Tessela Remix)
B1. Bleeding Colours (Untold Remix)
B2. Dumpster (Clouds Remix)