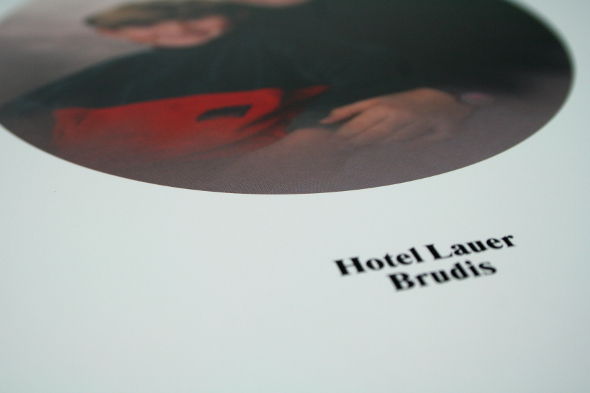 Phillip Lauer’s career has been characterised by collaborations: The Tuff City Kids project with Gerd Janson, the cosmic shuffle of Arto Mwambe with Christian Beißwenger, or even he work in now-defunct German Thrash/Hardcore band Destroyer. But it’s arguable that his first real collaborative experience happened at seven years old, when his parents brought younger brother Jacob into the world. The front of the Brudis EP proudly displays the two Lauer brothers rocking their sporty bowl cuts for the world to see at a department store photo centre – a light-hearted, humorous image that’s far from your typical sombre DJ duo press photo fare.

But beyond the novelty of seeing the brothers Lauer as children, the cover of the Brudis EP is a reminder that sibling-hood creates a certain undeniable chemistry. You see each other at your best, and worst, and your ability to negotiate with each other grows in leaps and bounds as the result of myriad arguments over who gets to use what Lego blocks or eat the last chicken nugget. So it’s no surprise that Jacob Lauer sounds right at home producing next to his older brother; producing together seemingly a logical progression of spinning sets together as part of Brontosaurus Junior Club night, and even though this is Jacob’s first stab at production, the brothers Lauer come across as a well-congealed nu-disco machine.

Stylistically, the Hotel Lauer project falls somewhere between the sum of all other material from the German – it’s A bit more serious than the “yacht rock house” of his Phillips album on Running Back, but filled with more hooks and catchy moments than the left-field experimental-leaning Arto Mwambe project. It’s three lovingly concocted throwbacks to a past age; dance music that rejects categorization as “throwback music” purely on the energy with which it exuberantly carries it’s concepts out with.

Opening track “QD” takes a perverse joy in coming close to bending the melody out of tune, shifting pitches ever-so-slightly that the rusty Italo-referencing number teeters back and forth between sounding like it’s being played at the wrong speed. Once you adjust yourself to its slightly off-kilter rhythm, it slithers into you like a parasitic earworm; an unearthed piece of Detroit futurism. Out of the whole EP, it’s the most reminiscent of my favourite Lauer moment of all time – the euphoric, slow-unfurling “Mascat Ring Down” released on Beats In Space back in 2012. And although “QD” doesn’t nail the exact same summertime vibe as Mascat, it’s certainly a track that can thaw the winter off the bones of dance floors nationwide.

Turn the record over and you’ve got “Calcit” – one of the bassiest Lauer productions this writer has heard to date – sending reverberating bass stabs  bouncing throughout like a ray of light trapped in a cube constructed entirely of one-way mirrors. As it progresses, the throbbing low end of the track is balanced out by some shimmering synth patterns that seem like a conscious nod of the head to Shep Pettibone’s famous New Order remix of “Bizarre Love Triangle” – but as soon begins to sound as if it could open up into a joyful summer track, the bass kicks back in, tethering it to a grimier realm.

But perhaps the EP’s most surprising moment comes in the stripped down, acid-tinged 808-pinging electro of “Smend”, a departure in style from the rest of the release as well as the one which would sound most at home in a remake of Breakin’. It’s a loose-limbed freestyle jam boasting a big, brassy tidal wave of a chorus, belted out with what sounds like an accordion. It’s the Lauer brothers at their most playful, and it’s their ability to effortless tap into that youthful, light-hearted joy that makes Brudis EP an essential family affair.