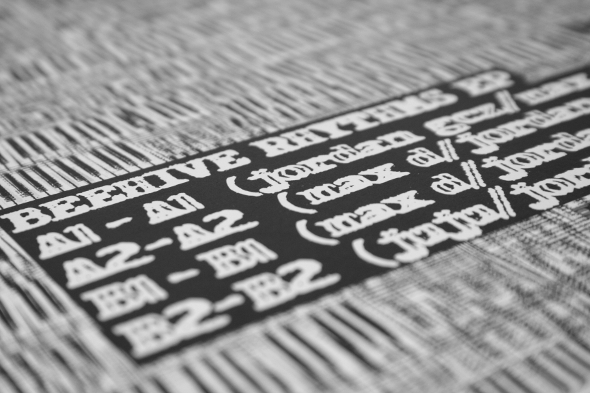 When Juno Plus asked Off Minor Recordings boss Jordan Czamanski for more details on the Zsa Gang collaboration with Future Times’ Andrew Field-Pickering, the response was typically tongue in cheek. â€śWe kinda wanted to record a punk 12â€ł but we couldnâ€™t/were too lazy to arrange a drum kit,â€ť he told us, â€śso instead we just jammed in the studio on a 909 and a CS30.â€ť It seems like the perfect project for a label that increasingly seems to be more interested in putting out out the rougher music of Czamanski and his cohorts; the recent Tiny Breadcrumbs EP from Magic Mountain High contained material considerably less pristine than their releases for Workshop, while the standoutÂ KM20 Tapes (1992-1996) delved into tracks from Move Dâ€™s earlier days, lo-fi material that wouldnâ€™t sound out of place on a current L.I.E.S. record. 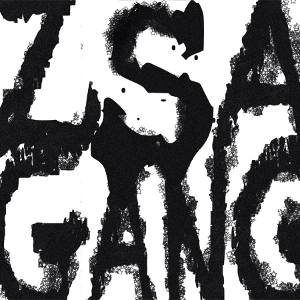 Although Czamanski and Field-Pickering arenâ€™t known for compromising to more conservative ideals when making house music, Beehive Rhythms nevertheless contains some of the wildest music to have been committed to wax from the duo to date. Considering the pair are usually known for their full-bodied basslines, â€śA1â€ť (which also sees a contribution from Pissflaps, a person described to Juno Plus by Czamanski as â€śa local drunk who is often hanging around the studioâ€ť) is suprisingly bare, with only a queasy lead and inebriated vocal accompanying the frenetic drum loop. Although it threatens to disintegrate into a confused mess, the drum loop always stays impressively focused. â€śA2â€ť could be mistaken for an obscure Dance Mania B-side if it wasnâ€™t for the detuned doppler effect drone that undulates throughout, all of which gradually decays as the track reaches its end in a frenzy of distorted beats and analogue bleeps. Itâ€™s not just noise for the sake of it though; underneath the trackâ€™s original structure can still be discerned, reminding us that the machines are being manned by consummate professionals.

While Side A is aimed firmly at the dancefloor, Side B is undoubtedly the recordâ€™s deeper half. The gently unspooling â€śB1â€ť resides firmly in classic Future Times territory, with the slow groove and spongy bass overlayed with kaleidoscopic new age synth flutes and deep analogue chords. â€śB2â€ť is much more freeform in its approach, with angular keys and scattered rhythms making it difficult to get an handle on the regular pulse underneath. Itâ€™s unsurprising that both tracks on this side also feature the talents of Csamanskiâ€™s Juju & Jordash partner Gal Aner on editing duties; the primitive, psychedelic approach of their collaboration is just as evident as Field-Pickeringâ€™s more blissful touch. Beehive Rhythms may be a far cry from being the punk record Czamanski and Field-Pickering set out to make, but itâ€™s still a record shot through with a â€śzero fucks givenâ€ť kind of energy that still manages to feel as focused as their other material. Considering the amount of hardware jams currently being pressed to vinyl of questionable quality, Beehive Rhythms feels like a rare diamond.