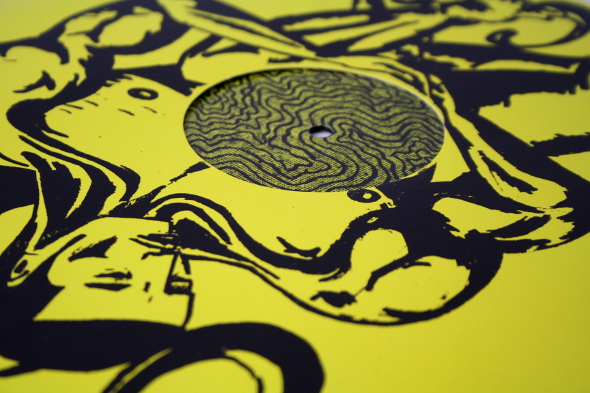 Recently I found myself in a scenario that will be grudgingly familiar to many, midway through a BuzzFeed questionnaire aimed at judging how much of a music snob I was. Like any half sane person, the tab was closed pretty quickly (not least because I don’t really need BuzzFeed to measure my music snobbery levels), but the question ‘Have you ever had your brain shut down upon being asked what kind of music do you like?’ stayed with me. Instead of the usual response of exasperating gasps and furrowed brow that accompanies such questions, Golden Teacher is the band I happily recommend anyone who asks to invest to their time in. 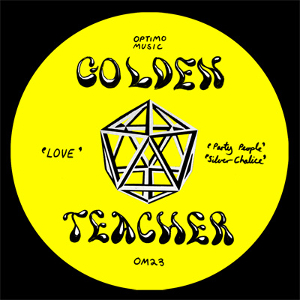 There’s been something so alluring and magnetic about Golden Teacher releases thus far on Optimo Music that you almost don’t want to see the band perform live in case they don’t live up to the expectations set by their 12”s – typically a video of them performing at Sub Club vociferously suggests this not to be the case. Party People is their third record for JD Twitch’s increasingly impressive label, and is every bit as bewildering as the group’s previous releases, despite the fact it distills their sweat and cowbells approach down to just three tracks. Interestingly, the band have gone on record to state the title track was the very first Golden Teacher committed to tape at Green Street Studios, so this record offers a chance to experience how the band have developed over time.

There’s a definite stylistic contrast between “Party People” and “Love”, the track that opens this record which sounds like Factory Floor drunk on Tesco brand vodka, towering perilously over their hardware. A probing laser-like lead synth and skittering 808-driven percussion are the core elements here, pulsing with unpredictable intensity as frontman Charles Lavenac bellows out indecipherable vocals that get lost amidst the swampy bassline. It’s tracks such as this that make you want to cast aside any of those aforementioned fears about Golden Teacher and get lost in the music with them exploding onstage in front of you.

The seven minutes of freeform percussion, classic disco basslines and grunting vocals that makes up “Party People” has much the same effect, and more than justifies the label’s original description of Golden Teacher sounding like “Arthur Russell’s Dinosaur L jamming with Bobby O, K Alexi Shelby, Liaisions Dangereuses and Imagination, with some voodoo drummers and Sly & Robbie”. Despite these comparisons it’s hard to think of any other band right now sounding like Golden Teacher, and long may it stay that way.

A1. Love
B1. Party People
B2. Silver Chalice