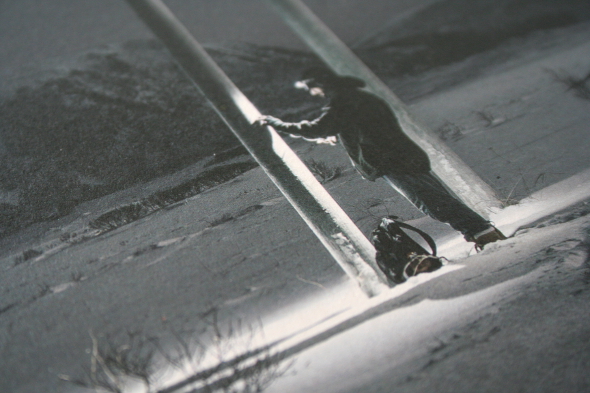 Ambient music doesn’t always have to be floating textures, light atmospheres and healing synths, it can be gnarly and visceral. That’s the route Eric Holm has trodden to create his snowy debut opus Andøya for Bristol’s Subtext label. As the story goes, Subtext Recordings released ‘two seminal 12″s’ by industrial grime pioneers Vex’d in 2004 and 2005 – the Pop Pop / Canyon and Lion / Ghost 12”s – and then disappeared. Since Paul Jebanasam reignited the label in 2011 it’s by and large become home to the music of Emptyset and Roly Porter, the latter one half of Vex’d.

Cynthia Millar who plays the ondes Martenot – an early electronic musical instrument from the 1920s that sounds similar to a Theremin – is the only other name to appear on the label, making the introduction of Eric Holm all the more interesting. But before diving into the music, it’s a good idea to understand where this record is coming from. Some quick Googling reveals Andøya is the northernmost island in the Vesterålen archipelago, situated about 300 kilometres inside the Arctic Circle. This alone provides a pretty distinct gauge of the record’s temperament: not only does it appear on the same label as Emptyset, it takes inspiration from one of the coldest and most remote places on earth. 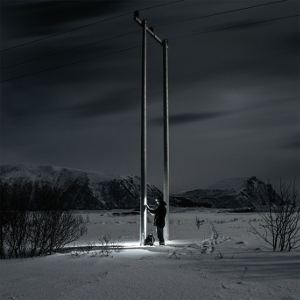 The cover art shows a lone figure standing up to his shins in snow at the base of a power line in the middle of a freezing, but beautiful nowhere (photography by Emptyset’s James Ginzburg). So even before the needle touches the record, themes of Andøya – solitude, coldness, the dark, electrical power, wild landscapes – are as clear as a northern Norwegian night. Holm’s apparent influences are similar to what inspired Scott Morgan to make the Sketches Of New Brighton LP as Loscil for Kranky in 2012. New Brighton, a small park overlooking Vancouver Harbour, is described by Morgan in several interviews as “a strangely natural yet unnatural setting,” and because of its nearby ironworks and bridges it’s where he says nature meets industry.

This paints a picture of what parts of the Vesterålen archipelago may also be like, but using the soundscapes of Holm’s album as a fundamental reference, I can’t help but feel Andøya is more rugged and unforgiving in its isolation than New Brighton. Beats can be heard throughout Andøya but they’re not drums that sound like they’ve been drawn in or sequenced to an arrangement. Instead they’re irregular pulses of low end frequencies or syncopated tribal knocking that sway in and out of a loose time signature (if one’s there) that’s made all the more convoluted by the sound of cold machinery being knocked, sparks, and the pressure rhythms of seething white noise being choked or released.

For the album’s more ambient works, “Stave”, “Ase” and “Hoyvika” are the best examples of Holm’s ability to weave uncouth and thunderous sounds into a steam of textural mist – and the growls and electric bites of charged static that dwell within it. It’s powerful listening that’s not as dominating as the Emptyset, nor is it as industrial or effervescent as Roly Porter’s work. Holm’s style veers away from a noise or power electronics tag, landing his music either side of what Subtext has released so far, thus falling into place perfectly.