A Sagittariun – The Jupiter Chronicles EP 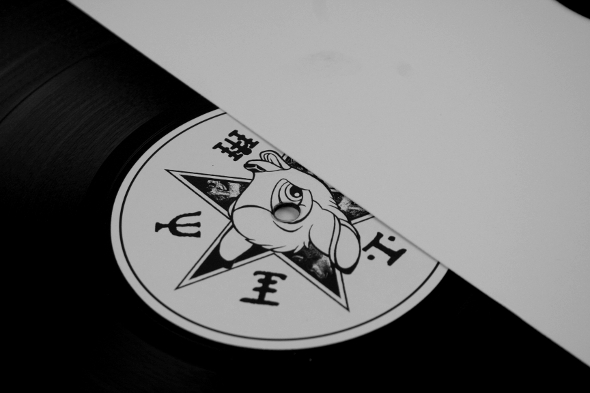 For listeners of a certain age, there’s nothing particularly new about the stargazing, psychedelic techno antics of West Country man-of-mystery A Sagittariun (a pseudonym for a 40-something house producer whose identity is an open secret in his home city of Bristol). His style – all thickset techno rhythms, tight breakbeats, dreamy chords and intergalactic electronics – offers a thrilling blast from the past for anyone who lived through the “intelligent techno” boom of the early ‘90s. Think Megadog parties, chill out rooms, Day-Glo drapes, tie-dye t-shirts, astrological wall charts and car loads of frazzled crusties heading to illicit raves in Somerset fields.

That’s not to say that the A Sagittariun records to date – and there have been a few since he made his debut with The Circle Stops Somewhere 12” back in 2011 – are mere pastiche. They’re all incredibly well observed, of course, down to the tiniest detail, but more importantly stand on their own two feet as superb examples of heady, intoxicating electronic music. His debut album, the superb Dream Ritual, expanded his palette to include ambient, downtempo and IDM, as well as his particularly brand of acid-fried intergalactic techno. While reviewers noted the inspiration – Renegade Soundwave, Psychik Warriors of Gaia, pre-prog Spooky, Meat Beat Manifesto, the Shamen’s weirder moments, Brown Album-era Orbital and early Speedy J were all mentioned – there was much praise for the quality of the music. For those who were barely out of nappies when those acts were in their pomp, Dream Ritual seemed fresh and exotic; for those whose record collections are still stuffed with those kind of “intelligent techno” 12s, it was an opportunity to revisit their long-lost youth.

The Jupiter Chronicles EP, A Sagittariun’s latest trip into techno nostalgia, isn’t much of a departure from his previous material. That said, it’s still stuffed with quality material, with each of the four tracks rippling with psychedelic fervor, sub-heavy stomp and long-forgotten ambient synth sounds. “And The Moon Still Be As Bright” sets the tone, lacing twittering melodies and dreamy chords over snappy drum machine rhythms and a heavy, undulating bassline. The percussion is worked hard, giving the track a strange sweatiness in marked contrast to the hippy-ish title and tumbling chords. Listen carefully, and you’ll also hear an unlikely nod to one of Bristol’s new school heroes, the ubiquitous Julio Bashmore. It’s subtle, but it’s in there; see if you can spot it.

“Ascella”, on the other hand, is unflinchingly heavy. Built around loose techno breakbeats and pulverizing sub-bass, it’s the kind of saucer-eyed, heads-down fodder that used to be commonplace circa 1992. There are darting, repetitive riffs, of course, but these get lost in the spooky, hedonistic groove. There’s a little bit of Bandulu about it, arguably crossed with Orbital and The Orb’s more upbeat moments (“Assassin”, perhaps). There’s a similar, if sparser, feel to “Re-ignition”, whose cascading, delay-laden electronics and unstoppable, stripped-back groove casts a look in the direction of vintage Detroit techno. Its occasional bleeps and hypnotic bassline recall early British techno, too, and the material from Berlin techno producers that would eventually be renamed trance. That’s not to say it sounds like a trance record – it doesn’t, by any stretch of the imagination – but rather that it sounds like material recorded in Germany during that period, from producers such as Thomas Fehlmann, Sun Electric and Holy Language.

Sun Electric is a good reference point. The German duo, whose early productions appeared on the Orb’s W.A.U! Mr Modo imprint and the mighty R&S Records, were masters at delivering the kind of space age intelligent techno that neatly joined the dots between drug-fuelled basement parties and the beanbag-friendly ambient house scene. There’s a definite Sun Electric feel about “Wave Upon Wave”, whose pulsating sub, skittering breakbeat and cosmic pads also doffs a cap to British breakbeat hardcore and the psychedelic techno ramblings of Eat Static. These references won’t mean much to those born after 1990, but that’s almost the joy of A Sagittariun’s work; for those of us in our mid-30s (or older), it gets us scurrying to rediscover the long-forgotten techno records of our youth. For younger readers, it should provide inspiration to discover one of dance music’s most overlooked micro-genres.