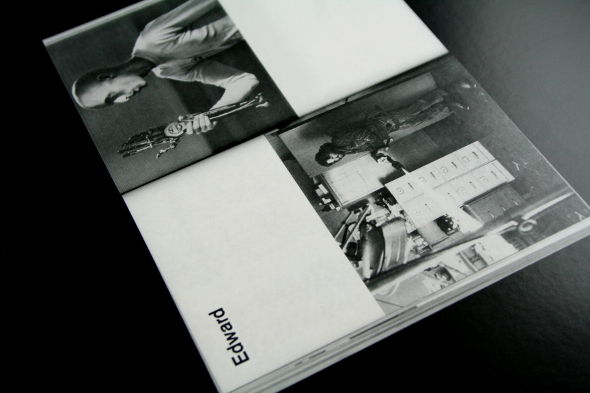 With his affiliation to the Giegling imprint as well as his regular appearances on Oskar Offerman’s White imprint, Gilles Aiken’s profile as Edward has risen noticeably in the past year after a slow and steady emergence that stretches back to 2007. His approach to 4/4 electronic music sits at an interesting intersection at certain points in thrall to the cinematic shimmer and pronounced thump of the Innervisions crew, at others reaching to avant-garde sampling and organic instrumentation to create a wild and evocative soundworld. Certainly his recent side-project Desert Sky has yielded some truly out-there material with only the faintest whisper of four-to-the-floor in favour of a rich tapestry of ethnic percussion and abstract tones.

Lead track “Feuerhand” on this release for Oliver Hafenbauer’s nascent Die Orakel label follows the thread that Desert Sky started, heading instantly into a dense collage of new wave drum machine beats, looping drone, scraping texture and a live sounding bassline. It’s a decidedly left of centre stance that continues to be embellished with languid guitar, heavily reverbed percussion and more, never deviating from the core loop of the track but instead opening up in the later stages with some choice vocal cries that lend themselves perfectly to the worldly sound being conjured up. “Midnight Express” by contrast is a much cleaner track, all functional drum track and distinct melodic parts. That said, the lead synth comes on like a mournful flute; an unconventional choice of sound for a house track and certainly enough to give the music a unique twist. Even with the dynamic layers at work in the production, this is Edward in straight-up electronic mode, and while it’s a proficient club cut with enough soul to set it apart from the pack, it lacks the untamed excitement that hums around “Feuerhand”.

“Symbols Of Balea” puts paid to any such grievances with a sprawling 13-minute opus that opens on tensely plucked guitar strings and a sound that could be crashing waves or rushing traffic, politely preparing you for a serious ‘journey’ track. It unfolds slowly and delicately, Theremin-like wobbles feeding in and out of the mix, extra harmonic layers swelling and receding in the background. At those peak points the emotions of the track run high, before falling back down into the meditative core of the track. It’s a remarkably effective result for a track that shirks progression and pace in favour of a protracted mantra, and it makes for a smart counterpart to “Feuerhand”.

This record does serve to posit Edward as something of a duplicitous producer, on one hand adept at turning out streamlined club fodder and on the other getting truly stuck into spiritual incantations of the highest order. On one release that can seem like a stilted combination, and in truth his wilder output holds more promise and individuality, but of course no-one likes a one-trick pony. If he can continue to explore these separate avenues who knows where future crossovers between the two might lead?

A1. Feuerhand
A2. Midnight Express
B1. Symbols Of Balea