Octavcat – In Memory Of Old Gear 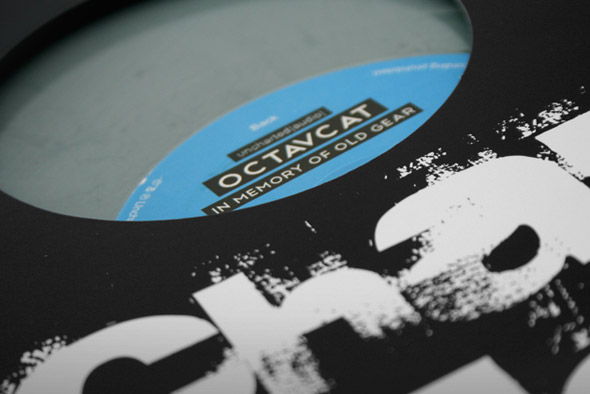 There’s a strain of UK electronica that always seems to get overlooked, despite the fact that it sports some of the most fun, accessible and interesting ideas to emerge from the post-Warp fall out. It’s a curious beast that draws upon the full-bodied colour and grind of electro, the limber crate-digging drum funk of hip hop and broken beat, and the developed and emotive melodic nous of classical composition. You would have heard it on Aphex Twin’s Analord series, the criminally ignored Dave Monolith output on Rephlex, or the ADR album Chunky Monkey on Hippos In Tanks.

On their fourth album Octavcat are clearly singing from the same funky hymn sheet as the aforementioned acts, and it’s refreshing to let the mind be dazzled by the craftiness, catchiness and irrepressible energy of their trade. Indeed the whole of In Memory Of Old Gear is like a slap in the face to any lo-fi evangelists hiding a shortage of studio prowess behind possession of the right gear. If this album is a celebration of vintage studio equipment then the trio behind Octavcat are in full command of their devices.

“Rotator Cuff” gets the album off to a fine start, marrying twin electro synth lines together over a crisp drum machine beat, but it doesn’t take long for the track to twist up and spray out into multi-faceted party monster. The embellishment of live drum skits over the mechanical groove adds a loose-limbed flavour, while the manic arpeggios move between minor keys and modal scales with a jazzy abandon. “C16 Dual” operates with a similar manic intensity, all twitching chord lines hammering against a wealth of effects tweaking, while “Quanta” throws down a hooky lead with a nasty bassline dutifully following it.

It’s not all dirty business though, as “Spotbommit” neatly demonstrates with its downtempo Mo Wax groove and melancholic keys, although even here the track evolves into tricksy diversions that snag at the outlying structure of the track without ever knocking the rhythm off course. “Diurnal Arc” too is a more searching cut that calls to mind Plaid in the inferred mystery of the melodies and the stop-start beat. There are more feisty moments as well, such as the breakneck pace of “Fighting Cider” which touches on that maligned 90s term drill n’ bass with its speedy break chops, and the frenetic techno abstraction of “Panstarrs”, but for the most part Octavcat are happiest nestled in a mid-paced tempo range quick enough to startle the ears as the elements zip past, but not so hyperactive as to get fatiguing.

As stated at the beginning, there is plenty of lineage to this album but that doesn’t detract from the effervescent energy that radiates from Octavcat’s creations. The attention to detail is always a great appeal in this music, and on each new listen another microcosmic touch will reveal itself. From the smallest filter sweep to a staggering bass injection, fans of jovial electronica will be all over this impressive body of work.