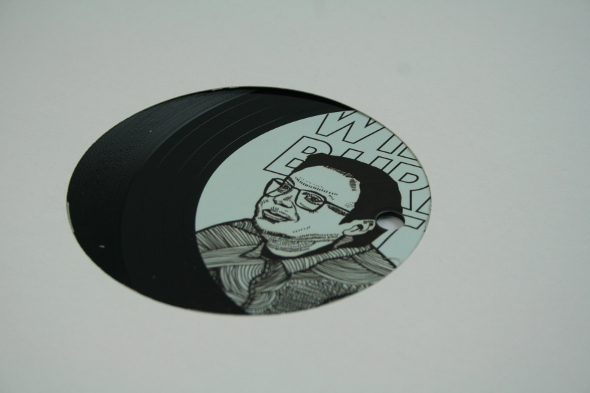 William Burnett is something of a musical magpie. Since first pricking the collective consciousness back in 2007 with the off-kilter kraut-disco vibes of his early Grackle productions, he’s gone on to produce all manner and weird and wonderful fare under a dizzying array of pseudonyms. There have been intense analogue jams for L.I.E.S, picturesque, near Balearic house outings for Crème Organization (both under the now familiar Willie Burns moniker), some thrilling experiments in drone and kraut-influenced textures as Black Deer (see the brilliant The Last Tortuga for Emotional Response), and all manner of intriguing collaborations and side projects (the now forgotten Galaxy Toobin outing on Crème, an ongoing trickle of breakbeat hardcore influenced Daywalker + CF releases).

Yet despite his fixation with flitting between styles – something few producers are capable of doing quite as well – each of Burnett’s productions comes cloaked in the unmistakable fuzziness of vintage analogue hardware. Whether he’s making blissful downtempo fodder, oddball disco, ragging acid house (see his recent outing on The Trilogy Tapes) or balls-out techno, there’s a pleasing crustiness to the sound that’s undeniably his own. Increasingly, Burnett’s influences are becoming more apparent. As well as vintage Chicago acid and early techno, recent productions have doffed an imaginary cap to early British breakbeat hardcore, classic Belgian techno and the sort of pulsating, shirts-off late night fare that stirs long repressed memories of bizarre early ‘90s warehouse parties. Ordinarily, it would be easy to dismiss this as shameless revivalism, yet the quality of Burnett’s production – not to mention his obvious affection for the period – suggests that such accusations are wide of the mark. Besides, at least there’s a liveliness and quirkiness to his trips down memory lane, something that can’t be said for all producers operating in this sphere.

Given this passion for recycling the past, it’s perhaps fitting that Burnett’s latest outing under the Willie Burns moniker has been picked up by Unknown to the Unknown. Since launching in 2011, DJ Haus’s imprint has consistently delivered tough floor focused music from an impressive cast list of past, present and future heroes; the likes of Legowelt, DJ Q, DJ Stingray, Marcus Mixx and Capracara. Even the label’s deeper moments seem primed for dark basements, cold warehouses and dank, moonlit fields.

Of course, the Woo Right EP is not all about wired, twenty-first century body music, but it’s the release’s rougher moments that arguably hit home hardest. Take opener “The Heaviest Elements”; despite being little more than a handful of twisted electronic loops rising and falling in unison above a bombastic analogue bassline and stomping machine drums, it sounds like an underground anthem in waiting. It’s perhaps not as raw as some of Burnett’s material, but there’s a pulsating intensity that suggests a desire to create trance-like states in dancers. Certainly, it feels like a record you’d want to “lose it” to out on the dancefloor.

The EP’s other saucer-eyed moment, “Woo Right (OG Version Made During Video)”, is a little breezier. It features the same kind of straightforward, no nonsense drum machine rhythms and hypnotic electronics, but its riffs and melodies are a little deeper. Its irregular blasts of classic rave piano make it feel like a lost warehouse classic, while the subdued organ riffs recall mid-90s New Jersey garage. While these sorts of sounds are commonplace these days, Burnett uses them better than most; certainly, there’s a sparseness and looseness to the production that ensures a rare freshness.

Ironically, the EP’s two standout moments are those in which Burnett returns to a deeper style. “Adverbs and Adjectives”, a trippy, hypnotic, occasionally dreamy trip into analogue house territory, is particularly delicious. It reminds this reviewer of the picturesque work of Steve Summers and Bookworms’ under the Confused House moniker, only with a little more dancefloor grunt. It’s a thing of rare beauty. Then there’s “Fast Times at Long City High”, whose dreamy, delay-laden production, calming melodies and lucid feel sounds like Selected Ambient Works-era Aphex Twin crossed with Bobby Konders. It’s really rather wonderful, and offers further proof – if any were needed – of Burnett’s immense skill at creating electronic mood music. For all his skill as a producer of rough-and-ready dancefloor smashers, it’s really this side of his repertoire that regularly impresses the most.