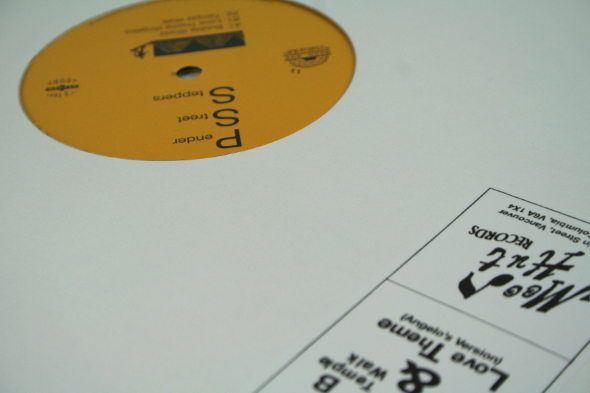 The Mood Hut collective’s geographical location in Vancouver, and reluctance to give interviews may position them as outsiders of a sort, and their nostalgic art direction may add to the compelling sense of mythology that has started to emerge around the group, but you get the sense it’s being done out of an enthusiasm for music and records rather than to craft some false mystique. Although their closest musical allies would probably be Future Times, they have more in common with Bristol’s Young Echo collective; both are a groups of young friends who expand the parameters of a key genre into something quite unique but still recognisable, through a shared spirit of collaboration, leading to an occasionally bewildering array of solo and group projects.

Although Aquarian Foundation, Cloudface and Ttam Renat are already known from their vinyl contributions to the collective’s label last year, Pender Street Steppers will have gone under the radar to many until now, but those lucky enough to have heard last year’s Life In The Zone cassette from the duo would have heard a mix of all-original material as impressively crafted as Galcher Lustwerk’s mixtape for Blowing Up The Workshop, a collection of genuinely uplifting grooves whose naivety only added to the charm. It can be difficult to untangle the nuances of each Mood Hut project, but Pender Street Steppers’ approach feels very distinct: a rhythmic nod to ‘80s hip hop, a love of weird sound effects and more of a willingness to switch up the tempo. The tip of the hat to the dub tradition made in the name probably isn’t a coincidence either – the spaciousness in their productions is palpable.

Bubble World features three tracks taken from Life In The Zone, but they feel just as fresh presented on vinyl. The title track presumably takes its name from the flip-flopping sound effect that runs throughout; the image it creates of an automated bubble machine is on just the right side of charming, helped by the dream-like pads that drift throughout. It’s far from aimless ambient-heavy house; the thick bass and broken beat rhythm consisting of chunky kick drum and crisp percussion are refreshingly unusual, keeping everything strangely light considering their gritty character. “Love Theme (Angelo’s Version)” which sits on the flip is even more remarkable; the half time rhythms makes the connection to hip hop even more explicit, but with the warm chords, squeaky synth line and bold saxophone solo that runs throughout, you can almost feel the sunshine of the fabled Canadian Riviera on your face with a mojito in your hand.

It’s this transportative quality that perhaps marks the Pender Street Steppers out from their peers. The music of their associates certainly sounds just as familiar in an alien way, but the Pender Street Steppers seem to have crafted a world of their own. “Temple Walk” is a case in point; the new age synth chimes and pillow of bass give the impression of being cocooned, though the tumbling breakbeats owe more to ghetto house, showing that deep house doesn’t necessarily have to come with the fatigue of a limp 4/4 rhythm. The fact that the Pender Street Steppers and the rest of their Mood Hut associates are figures on the fringes of house music may put off those who find the current crop of similar producers too self-consciously “lo-fi”, but it’s hard to imagine that this record would be anything other than universally loved by all fans of real deep house.