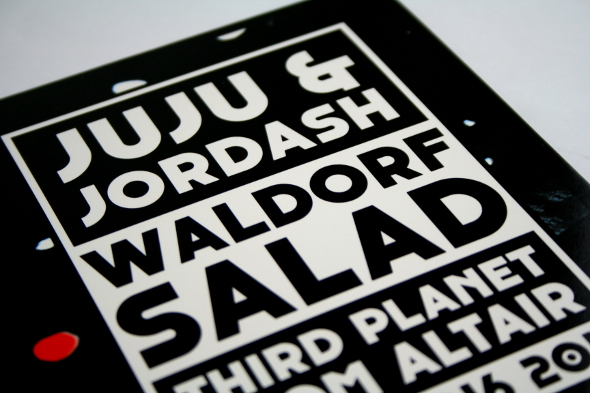 It’s been a while since Juju & Jordash brought it back home to Dekmantel. With their excursions on Golf Channel, some fine remixes and continued live and recorded explorations with Move D as Magic Mountain High, Gal Aner and Jordan Czamanski have certainly not been resting on their laurels since they dropped their last LP Techno Primitivism on the Dutch label they hold a strong affiliation to. The duo’s evolution has been a particularly measured one, perhaps in keeping with their instrument-led approach to electronic music. Where many artists can take their ‘sound’ through wild peaks and troughs as a reaction to new technology feeding into their creative practices, Juju & Jordash have instead matured gently from their first appearances on Real Soon and their self-titled debut LP. The influences and intentions have remained much the same, but their control over their machines has refined over time; a fact which is apparent listening to this upfront two tracker.

That there has always been a consistent inspirational thrust behind the duo’s work ensures there is a familiar ambience contained within both “Waldorf Salad” and “Third Planet From Altair”, part cosmic jazz, part psychedelic reverie. That this mood is conveyed through synthesisers and effects units rather than organic instrumentation is elementary, the spirit of the music transcends the trappings of the medium. So it is on “Waldorf Salad”, which entwines different layers of arpeggios from punchy low end to twinkling high frequencies with a wonderfully delirious end result. There is an uncanny natural ebb and flow to the way these different melodic threads interact with each other, never seeming to stick to a rigid loop rather than subtle variations and mutations that keep the sound moving in your ears with that aforementioned psychedelic end result. This trippy tomfoolery comes framed with a tough and purposeful beat which has its own unique shimmy to it, affording the right kind of DJ the chance to wield this mind-altering reverie into a dancefloor situation that would stand stark against your common or garden house tracks.

If “Waldorf Salad” is all fluttering melodies and starry eyes, “Third Planet From Altair” is an emotionally tense heads-down work out, as demonstrated by the protracted lead in with its stark kick, questioning keys and what sounds like a quick stabbing violin. At that point it feels like the track could unfold in any number of ways, but the righteous clap that whips into earshot instantly rounds the elements out and defines the music as a command to think less and dance more. Indeed this track works as a neat antithesis to the flirtatious mood of the A-side, instead operating on an unconscious level to achieve that transcendence that Juju & Jordash have always aimed to elicit with their music.

For all that poise and patience, the reward comes in a feisty injection of rhythm at the midsection as the drums pick up the pace and add some much welcome funk into the proceedings. The central synth and string lines remain consistent so as to keep the spirit of the track intact, again illustrating this track’s proficiency as a body mover rather than an attention grabber. That is not to play down the highly developed musicality at work behind the track, and there is certainly a heavy emotional load that those melodic elements carry, but that is simply another area in which the pair have evolved their skills in knowing where to deploy them with restraint.

Perhaps such discipline comes as a result of a hectic gigging schedule and their continued commitment to improvisation and reacting to an audience. It can’t hurt to have that skill when you enter the studio with an intended end-point in mind. Either way, this single serves as another example of how artists such as Juju & Jordash are constantly raising the bar for composition, performance, production and identity in dance music, and long may they continue to do so.