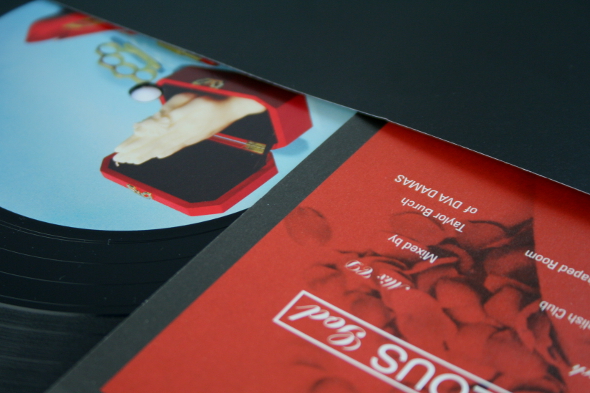 For those of us out there that are less creatively blessed, prolific musicians can take on fairly intimidating dimensions, and Oliver Ho is one such example. The British producer has spent the best part of two decades servicing the record shops and dancefloors of the world with his various strands of techno, and more recently has begun to exhibit signs that his creative talents stretch beyond pounding kick drums. ProgramME, the 2012 album as The Eyes In The Heat he released alongside Zizi Kanaan offered a fragmented viewing into some of Ho’s other influences, but was perhaps a bit too polished despite the best of intentions. Yet here he resurfaces as Broken English Club, finding a perfect home on the Jealous God label, and this five-track release only seemingly touches the surface of a vast catalogue of unreleased material under the name.

Spend some time with your favourite search engine and the words ‘Broken English Club’ and you’ll uncover all manner of works in progress, finished tracks and videos scattered across various corners of the internet. Considering that Ho has kept up a fairly consistent stream of output under his Raudive alias – including a recent album for Finn Johansson’s Macro label – this sense of creative ease puts any personal feelings of writers block that occasionally grip into chilling perspective. It’s pleasing to see how comfortable Ho is with the Broken English Club sound too, and it’s easy to see why Juan Mendez, James Ruskin and Karl O’Connor were drawn to these tracks.

Swinging languidly from moments of squalid feedback to lurching post punk, Broken English Club should immediately resonate with anyone out there that still likes to spin the White Savage Dance 12” by Regis in a darkened room with a dram of whisky for company. Ho’s heavily disguised vocals are a prominent aspect, and their deadpan delivery places him somewhere between Regis in rock star mode and some of Silent Servant’s recent live performances. The fact Ho made his breakthrough on Ruskin’s Blueprint label back in 1996 just adds to the sense that Broken English Club belongs on Jealous God.

But this fourth Jealous God ‘issue’ is still very much Oliver Ho’s own work, with “Boxes” and “Birth Control” both succeeding in capturing the mood in a manner that The Eyes In The Heat intended but didn’t quite achieve. It’s the B-side that the more adventurous DJs out there will gravitate towards, with “Casual Sex” wedged nicely in the intersection between EBM and techno. Rhythmically, Ho seems quite content to let the weighty arrangement rumble on in a functional manner, cloaking his delivery in just enough delay that you need to really strain to make out any words, whilst a fairly shrill synth tone appears midway through that only adds to the macabre feel overall. Jealous God 4 proves to be a bold statement from Ho, and the prospect of further Broken English Club material sharing space with Silent Servant on a Cititrax record is one that sounds quite appealing.

Having been rather late to the cult of Sandwell District, this new Jealous God initiative has offered me the chance to worship at the alter of Regis, Silent Servant et al, yet the accompanying mix CDs have proved more consistently rewarding than the music on the records – the continuing and rather infuriating usage of acetate sleeves is a discussion for another day. However, both the third issue from Silent Servant and this Broken English Club debut hint that Jealous God has swiftly found its footing, and you’d like to think they will continue to approach the interesting calibre of individuals chosen for the mix CDs so far. Certainly DVA DAMAS front woman Taylor Burch excels here on a seventeen track mix that effortlessly joins the dots between dub, post punk and metal dance, with the appearance of the glorious “Love Tempo” from Factory act Quando Quango towards the end capping a perfect selection.