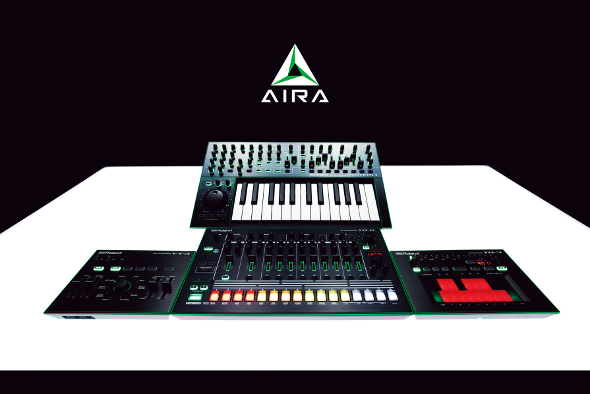 A new drum machine, synthesiser, vocal processor and updated version of the classic TB-303 are detailed by the Japanese manufacturer.

Hints of Roland’s Aira range have been drip fed to the eager masses for the past month now, with a number of videos leading to much speculation online as to what form their new range would take. Now Roland have revealed the range in full, which will include a drum machine, synthesiser, vocal processor and updated touchpad version of the classic TB-303, all encased in sleek black casings.

The two devices which will have most people excited are the TR-8 Rhythm Performer and TB-3 Touch Bassline. The former recreates the sounds of Roland’s classic TR-808 and TR-909 drum machines using Analog Circuit Behavior (ACB) technology, which supposedly allows “part-by-part analyses and faithful recreation of tonality and behavior”. The TB-3, meanwhile, is a touchpad bass synthesiser inspired by the legendary TB-303 unit, again using ACB technology to faithfully recreate the original’s saw and square waveforms, as well as its other elements which includes pattern creation.

The other two devices in the range are the SYSTEM-1 Plug Out synthesiser and VT-3 Voice Transformer. The SYSTEM-1 is a successor to Roland’s SYSTEM-100, 100M and 700 synthesisers, and can host plug-in versions of classic Roland synths like the SH-101, while the VT-3 is a voice transformer which can “transform your voice into synthesizers, synth basses, hard-tuned and lo-fi sounds”; all units in the range are designed to work seamlessly together. Full details on release date have yet to be revealed, but the units will cost £399 for the TR-8, £245 for the TB-3; £495 for the SYSTEM-1 and £159 for the VT-3. Further details on the range can be found at the official Aira website.