ANAΣΤΕΝΑΡΙΑ: Music Of The Fire Walkers 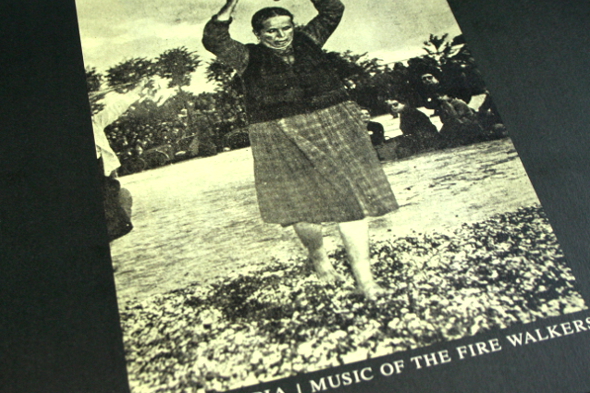 “If the Saint calls you, then you don’t feel the fire as if it were your enemy”. So says one of the participants in the Hellenic folk ritual of ANAΣΤΕΝΑΡΙΑ, where the participants walk barefoot over the glowing-red coals, protected by the power of the religious icons they clutch onto. Even though there are thermodynamic explanations for the phenomenon of coal-walking (coals retain heat poorly, your feet disperse heat better than you think), trying to explain it rationally seems not only disappointing, but missing the point.

Whether or not the Holy Spirit is encompassing the participants of ANAΣΤΕΝΑΡΙΑ, you can certainly hear the ghosts of the past swirling around to the debut release on ΚΕΜΑΛ, the archival-focused off shoot of 2013’s unstoppable Berceuse Heroique label. The decision to re-release a field recording of the 1979 ceremony might seem an odd choice for a label whose 2013 output was marked by names like DJ Sotofett, MGUN and Ekman, but there are quite a few parallels.

After all, techno thrives on exactly the same accelerating and rhythms and slow, steady push towards ecstatic climax that you can find within these largely instrumental hymns. As well, the fire walking tradition is just as much renowned for the way that participants dance ecstatically for hours before entering the fire, and the chance that one may be “seized” by Saint Constantine into a spasmic limb-flailing freakout. It’s not hard to see the contemporary connections between what it means to move ecstatically and in a trance, whether there’s a booming sound system involved or not.

While Music of the Fire Walkers would be an impeccably strong recording on its own, ΚΕΜΑΛ’s decision to pair contemporary remixes with each release brings experimental techno crossover artists Pete Swanson and Vatican Shadow to take a crack at the source material. Those names paired with the unsettling cover art (a woman hoisting a bible above her head, face contorted somewhere between reverence, pain and religious ecstasy) might make you think that these recordings would sound dreary, gothic, doom, or full of mourning. Yet one of the most striking things about the compilation is how full of life it sounds, crackling with age, but still outpouring with livelihood.

The organic, free flowing tempos of “ΤΡΙΑ” have a quick-seeping hypnotism that the sets in, resonating through the outdoor hills with myriad dips and alterations. These same slight permutations are also what give “ENA” its drawn-out immersive beauty – for a recording from 1979, it’s shocking how clear and crisp everything sounds. On “ΕΝΝΙΑ”, you can detect the point at which a spectator begins to clap along to one of the rhythms, at which point the energy in the field changes, intensifies and focuses itself.

But field recordings are only really impactful if they can capture and evoke the feeling of a location, a place, a moment – and it’s important to note that Music of The Fire Walkers achieves this stunningly by focusing on more than just straight-up music pieces. “ΕΞΙ” gives introspective study to the elements of nature surrounding the ritual; in just two minutes, you can clearly hear the wind blowing through the fields, the crackle of coal embers audible as if they were just feet away. You can hear the slow emergence of crickets chirping, and the way that at times the music ill be all but drowned out by the sound of passing trucks, subsuming the rhythm in a moment of chaotic noise. Similarly, “ΠΕΝΤΕ” places you in the middle of a crowd, where you pick up laughter and discussions, the excited yelps of children – it’s strangely comforting to feel plucked down in the middle of the community ritual.

On the second disc, Pete Swanson and Vatican Shadow take two divergent approaches to the source material. Swanson’s version lingers on the original recordings for fifteen second or so before it becomes awash in static distortion – the original sounds completely drenched in the howling buzz of malfunctioning equipment. It grows and pulses like a digital rainstorm, kick drums and high hats eventually remaining the only recognizable elements in a torrential avalanche of pixelated noise. Fans of the Unit Moebius Anonymous vs. Shitcluster remix of L’estasi Dell’oro’s “Kingdom For A Kiss” will know what to expect here – but for others less well-versed on Berceuse Heroique’s recent output, it’s likely to cause a few visits to your local trauma ward.

Vatican Shadow takes a (slightly) more pacified approach. Here is the only time throughout that the music of the fire walkers sounds downright cultish, the string section chirping away frantically underneath the suffocating weight of Dominick Fernow’s industrialized chug. An unmissable re-issue, Music of The Fire Walkers resurrects the ghosts, spirits, and community voices with shocking clarity, and shows that while the music that creates “ecstatic movement” might change with the generations, we’re still doing the same dance.