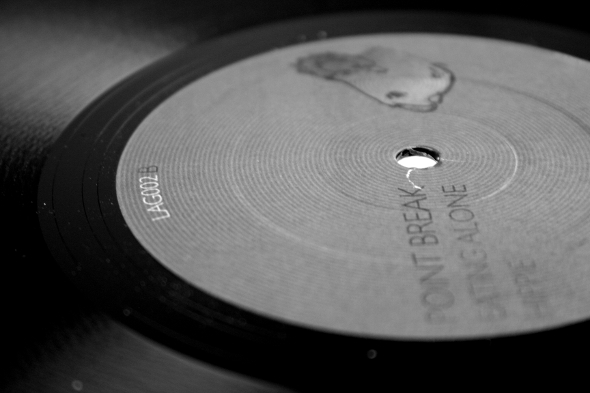 Something exciting is happening in New York. And it’s not just house music. Anthony Parasole’s The Corner is becoming one of techno’s most recognisable labels thanks to its distinctive art direction and releases from Shawn O’Sullivan, Tom Dicicco, Fred P and the label boss’ own collaborations with Phil Moffa. DJ Spider is at his most prolific, releasing an onslaught of murky, conspiracy fuelled productions across various national and international labels, established artists like Donor and Levon Vincent quietly keep doing their thing, and new names like Anthony Naples have just about become recognised figures overnight. And keeping this current wash of techno churning alongside the institutional venue and now label, The Bunker, is new club Output.

It was Output where Silent Servant played the title-track from Point Break’s debut EP Sidewalks after one half of the duo, Cory Metzinger, handed Juan Mendez an unreleased copy of the record in Detroit. “We were wondering what his reaction was to it and we both got text messages from our friends saying he was playing it at Output,” remembers Metzinger of a Thursday night bill Silent Servant played with Traxx, Ron Morelli and Minimal Wave boss Veronica Vasicka. That particular record was held in consideration by Parasole to become a future release on one of his labels, but due to a backed-up schedule, Point Break were given the option of waiting, “maybe, a year”, for a potential release, but ultimately offered them the advice: “keep shopping it”.

This sound advice bestowed Arthur Kimkskii, the other Berlin-based half of Point Break, with the confidence to set up his own label, LAG. Reaching a second release is by no means a milestone really worth commending, but an achievement nevertheless, and for Kimkskii, Point Break, and new artist Jordan Poling, The Split EP is another exciting and uncharted step in the right direction. The label itself remains barebones however, with records simply packaged in stock paper-inner sleeves, while the artwork is simple, this time featuring a koala, something more emblematic of the Australian outback than New York techno.

Point Break graciously takes the backseat on this record, giving the debut tracks from Jordan some modest limelight in the shape of A-Side positioning. Lead track “Together” begins with a quantized, downbeat kick drum that’s timid by itself, but given extra oomph by a short, burping bass pulse, maybe from a SH-101, that’s similarly sounding to a Maurizio record. Percussion like silverware being shaken around inside an empty wooden box is added to the mix, while crisp, filtered claps completes the track’s backbone; a body rhythmic and stripped down groove. Musicality comes via metallic synth shots that could even be Jamaican steel drums coated in a cooling resonator, which Poling plays like he’s having a go on Jean Michel Jarre’s laser harp.  Things get dank and dubby on “Solitude” where field recordings reminiscent of the Fünf compilation from Ostgut intertwine with a captured audio sample that sounds like a mic being caught by the same hand that dropped it. Warm, insulating pads fill the void between the beats.

Moving on to Point Break’s contributions and the first bar of “Eating Alone” feels like a production from two young techno producers brimming with confidence. For a moment during its opening passages there’s some suggestion things may keep to a Kalon-like booming minimalism, but balsa wood percussion shots add specks of light to a darkened tribal rhythm, only to be fully exhumed from its depths by shimmering synths that define the track. Synths continue to play a role in “Hippie”, in fact they’re the main attraction and come in two forms, a smoothed-over engine growl and a complimenting, overdriven sprinkle of arpeggiated blips, layered on top of a crunchy noise-floor and the crackle of low-lying textures.

Cory Metzinger and Arthur Kimkskii’s work together may still be in a nascent stage of development, but with the backing of people like Anthony Parasole and Silent Servant, and with the city’s club scene experiencing regeneration in the aftermath of 9/11 and playing ball with Mayor Giuliani’s repeal of a 1926 cabaret law, Point Break could be another breath of fresh air for a new New York.