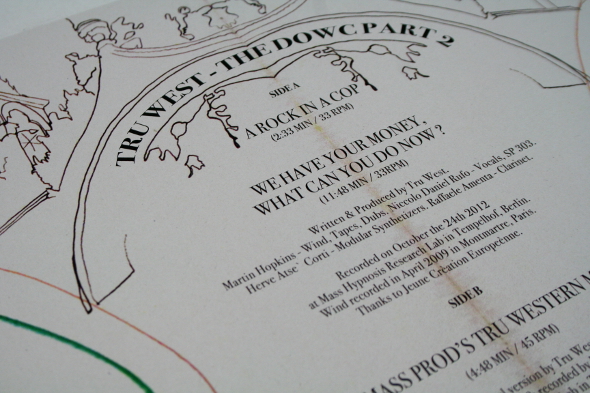 The first release on Marmo Music introduced the world to the twisted vision of Tru West, a collective of Italians in Berlin with a serious intent for sonic terrorism and the unbridled freedom it engenders. From harassed modular synthesis to malevolent sampling and glued together by a ferocious clarinet, the first part of The Decline Of Western Civilization spoke an ominous, abstract message caked in the muck of lo-fi, overdriven production. On the second installment, the approach remains true to the creative ethic that powers the project.

The A-side begins with “A Rock In A Cop”, a short segment that sounds as though it might edge towards a solid structure, but the jovial clarinet quickly piles head on into a wall of distortion that derails proceedings. Still though, there is an insistent synth line that bubbles underneath the noise, adding a sense of direction to the piece. As a curveball in the climax, wild distorted vocal yelps come spinning into the mix to add a new dimension of sound to an already duplicitous proposition. “We Have Your Money, What Can You Do Now?” tellingly leads in on a sample of wind distorting in a microphone, a recording reportedly acquired in Montmartre some four years ago, and from here the collective cut loose for over ten minutes. The clarinet still defines the character of Tru West, providing the focal point against which the other elements deflect. This becomes most apparent two-thirds in when it stands proud on its own, the synths and the vocals scurrying around it intermittently but deferring to the fearsome tonal power of the instrument. As with before, it’s a savvy update on grotty free jazz, championing impulsive expression and caring not a jot for considered perfection.

By way of drastic contrast, the B-side is given over to remixes that bring the project into a startling focus. First off Mass Prod (who works tapes in Tru West under the name Martin Hopkins) lets off a simmering tech house beat and slowly works looped samples of the noise into the mix, making for an eminently groovy tool that features some deliciously oppressive textures to boot. The real treat though is the Harmonious Thelonious remix, which makes for a logical follow-on from DJ Sotofett’s remix for the first Tru West release. With his ranging, African-influenced polyrhythms Stefan Schwader makes for the right kind of leftfield artist to bring a touch of clarity to the madness without losing sight of the experimental ethos that powers this venture.

The lead in to the remix is something of a misnomer, rocking what sounds like a fuzzy guitar loop and a low-slung beat that could be a beat to an early Beck track, but it doesn’t take long for the drums to pick up the pace and roll out in unconventional patterns. The trademark wooden synth line that defined The Malag, Schwader’s 2013 EP for Meakusma, reappears here, instilling that otherworldly quality in the remix, and that’s even before grandiose organ chords come steaming in to open the roof and let the light in. A beautiful breakdown gives way to an utterly righteous drum throwdown, giving the myriad encircling elements a chance to reset before swirling back in for the climax of the track.

What is fast becoming apparent with Tru West and Marmo Music is that the project is keen to balance the most extreme of noise-oriented art with more palatable sounds via the remixes, without having to compromise along the way. In choosing DJ Sotofett on the first record and Harmonious Thelonious for this installment, they are curating a label that challenges even at its most accessible, but gives rise to stunning music both on the edge and over it whether in original or remix form.

A1. “A Rock In A Cop
A2. We Have Your Money, What Can You Do Now?
B1.Mass Prod’s Tru Western Mix
B2. Harmonius Theolonious Sunset Liturgy Mix