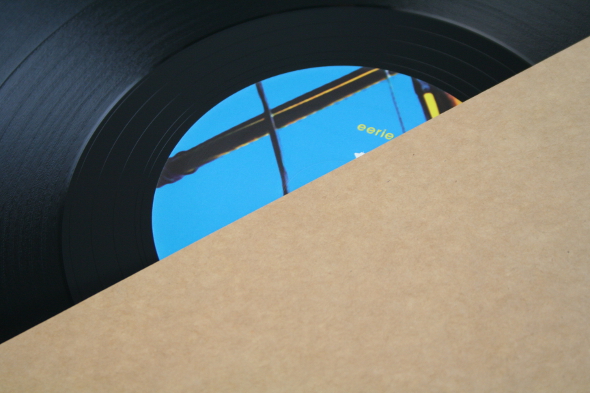 Healing Force Project records always sound out of time. That’s not a criticism of Antonio Marini’s ability to craft rhythms, instead, it’s as if the Italian producer’s productions do something to the fabric of the space they’re played in, stretching history, blending narratives and playing with the bygone past. Listen to his recent Omicron Segment CDR, and you might feel like you’re being transported through the early ages of psychedelia and obtuse rock, then throughout gleeful improvisatory era of spiritually-minded cosmic jazz, only to arrive at frazzled house and techno sounds of today. His recent Hybrid Furrows EP was referred to by Sequencias label boss JM De Frias as the kind of record that perks up the ears of hardcore collectors – the guys whose shelving units are buckling under the weight of 60,000 records.

So on Marini’s latest release, (the first EP on Marco Shuttle’s Eerie label to come from a producer other than Shuttle himself), it’s appropriate that one of the tracks is named “Dusty Time Machine” – indeed, it seems to be Marini’s prime mode of transportation. Marini spoke to me briefly online and revealed that the largest inspiration for this EP is the creative madness of free jazz. Listening to “Dusty Time Machine”, that sentiment isn’t surprising; freewheeling keyboard licks streak through the track chaotically for the first two minutes, only to be fused together by a rickety drum pattern. On first listen, it might sound like nerve-frazzling chaos, but there’s cohesion too. The track gels beautifully near the end with keys and drums are paired together in a wobbly push-pull competition for dominance.

An Italian interview with Healing Force Project filtered through Google Translate reveals a bit more detail than is available about the producer in English, including the fact that Marini’s first exposure to DJ sets and clubs involved the Italian Drum & Bass scene of the mid-90’s. While “Perceived Equidistance” doesn’t adhere to D&B in any kind of canonical way, one could argue that the heartbeat-like pulsations that reverberate through the mechanical track are a tiny tribute to the genre that got him started – with a scrambled electronic stuttering that rises from hissing background hum to the track’s heartbeat. “Average Perigee” has much of the same build, except with wavy synth washes replacing the electronics, giving off an immersive, hypnotic tone. It has the rhythmic thrust of a hand-motor propelled boat cutting through dark waves under an impending thunderstorm, and both are tracks that fit well with the aesthetic of Omicron Segment’s mystical artwork, seeming just slightly distanced from reality.

Despite Marini’s penchant for far-out experimentation, the Ecliptic View EP can play ball with more traditional dance music forms as well. Chatting over Facebook, Marini admits that he uses a blend of analogue and digital sounds to get desired results, valuing both synthesizers and analog sounds in their own right. “Tunnel Rat” makes gorgeous use of both, imparting the anxious feeling of being lost in a sewage-streaked labyrinth, tracked by metallic drum patterns that sound blunt and muted, as if they’re echoing off concrete. A slow-mounting sense of paranoid streaking through the track’s second half, as Marini introduces a spine-tingling electro line that sounds like a machine that has become sentient and just learned how to feel vengeful.

Marini’s entire EP eclectically fuses electronica, funk, jazz and techno together into a hybrid offering that, while perhaps daunting for some DJs, pushes boundaries, disorients, and provides more than a fair share of woozy thrills. But strangely, one of the most compelling moments of the EP comes right before the very end – in the last several seconds of “Dusty Time Machine”, everything goes quiet except for a series of drum solos, puncturing the grainy quietness of the track- the only time anything approaching silence is present on the EP. Afterwards, things plunge into darkness and the EP ends, those small drum solos feel like a small acknowledgment of the unlimited possibility in Marini’s production style – an acknowledgment that anything could come next, no matter where or when it’s from.

A1. Tunnel Rat
A2. Average Perigee
B1. Perceived Equidistance
B2. Dusty Time Machine