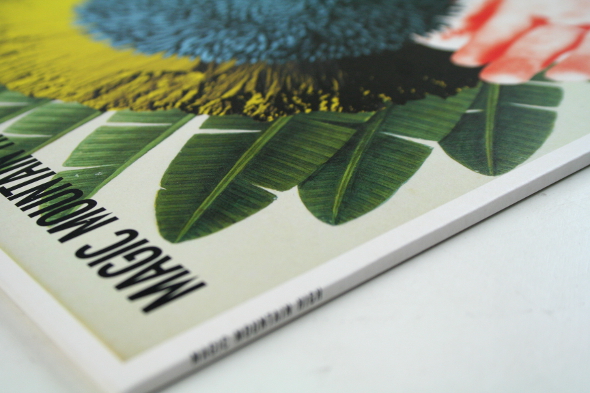 You can sense the live focus of Magic Mountain High in the first instant their new EP for Off Minor starts up. The combined strengths of Move D and Juju & Jordash have of course been utterly focused with this project on their hardware-rich live performances, and this release and previous appearances on Workshop have largely been by-products of a busy gigging schedule. It creates an interesting angle at which to approach a listening experience, with the context of the music bearing greater significance than the average studio creation. Although the first Workshop XX release and this new single do not appear to have been directly culled from live sets (unlike the Live at Freerotation CD and 12”) it is clear that they are borne from improvisation rather than composition, as is the mantra the trio operate by. As a result, the music is noticeably different in the way it unfolds and affects you.

When “Suub” comes fading into earshot at the beginning of the EP, it already feels like the jam has been rolling for some time, all rounded-out bass throb, glitchy percussion and a discordant synth line that whirls around in a scale of its own making, leaving no time to steel yourself before the undertow of the performance drags you under. From here the track unfolds organically, patterns and loops incepted and left to cycle while another aspect of the track is attended to. It might be the release on a high-frequency squeal or cutting the bottom-end for a couple of bars, but it builds in intensity in such a way as to plant the aforementioned context of the track tangibly in your mind, giving shape to the reflecting energies that bounce off the three souls at the controls.

Out of all the tracks that first one is the briefest, which adds to the sense that this was some wild peak culled from a much wider piece of continuous music. “Riptide” starts in a much more conventional fashion (i.e. a straight kick drum) but still it’s not long before there’s a lot going on, from the central synth line to the straining chords underneath, not to mention some growling low end content and high-frequency tones. It’s a much more melodic, balanced proposition compared to the jarring qualities of “Suub”, and equally it finds its groove and holds it for the duration, letting subtle shifts in the drum patterns do the work instead of any volatile twists and turns.

“Avalanche” finds itself stuck in between the two former propositions, following a linear rhythmic thread but equally coloured by impulsive handiwork as it unfolds. The glue that binds the track is in fact a ranging wind noise that whooshes through the mix constantly, succumbing by means of filter to the whims of whichever Magic Mountaineer had his hand on the dial at the time. In the first half some snarling acidic synth work comes in all lop-sided but distinctive, only to melt away again, while the latter half heads into tricky drum machine programming and dirty distortion.

“Don’t Cry For Me Argentina (No Compromise Mix)” is a more tender offering that lets the synths take the lead as gentle pads and a submerged bassline gallop into an emotionally ambiguous state. The control displayed as the pads fade down and the bass and beat forge into one focused entity shows just how much innate skill Magic Mountain High have in playing their equipment, using the age-old practice of dance music minimalism as a means of demonstrating this. It’s only needed for a few bars before the chords and swells come drifting back in to create an otherworldly abstract of deep house, part Theremin-baiting sci-fi, part Chicago throwdown, but essentially all unique.

As the last track on the release, “Don’t Cry For Me Argentina (No Compromise Mix)” leaves a lasting impression on the overall nature of Magic Mountain High. The premise of the project is indeed a commendable one, and there is something inescapably thrilling about witnessing it in the flesh, as it should be experienced. When it comes to these captured moments on record, the added scrutiny of the home listening experience sometimes jars with the improvised ‘happy-accident’ qualities in the music.

This is most apparent on “Suup” and “Avalanche” here, which also points to the fact that perhaps Magic Mountain High are at their most powerful when employing their astounding shared gift for melody and harmony in creating their more soulful, emotive output. Their Live At Freerotation recording would attest to this. While that’s not to say that their more abrasive material has its place in their live sets, on record it feels somewhat diminished alongside the majesty of the musical content, reliant on lucky tweaks and nasty noises rather than years of training that command the hand towards just the right chord for just the right heart string at just the right time.

A1. Suub
A2. Riptide
B1. Avalanche
B2. Don’t Cry For Me Argentina (No Compromise Mix)