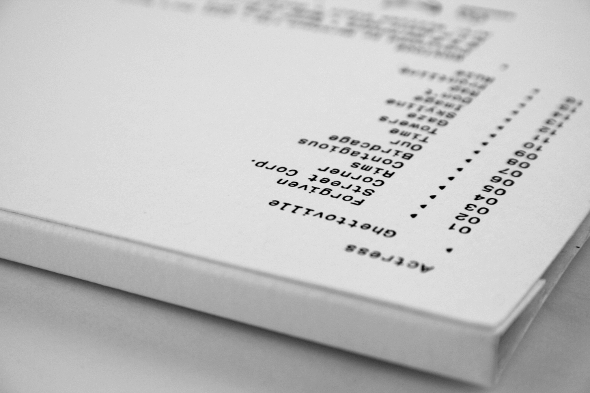 Let’s get this out of the way first: Ghettoville doesn’t make itself easy to like. Making this kind of statement in relation to Darren Cunningham’s vast and occasionally bewildering body of work seems fairly obvious – after all, he’s made a very successful name for himself out of making music that actively seeks to challenge his listeners, but Ghettoville really wants you to work for it. Next to the inexorable crawl through a bleakly imagined tableau of urban decay that is Ghettoville, the disorientating tone poems of 2012’s R.I.P sound almost like Radio 1 playlist material.

Ghettoville has been touted as a sequel of sorts to his debut LP, Hazyville, and it’s obvious in the shared use of grainy, washed out textures there’s a spiritual and aesthetic connection of sorts – even if there aren’t any explicit narrative connections. Talking to Pitchfork about the album recently, Cunningham explained that he wanted Ghettoville “to sound brittle, as if you were an addict and you feel like the world is crumbling around you.” It’s certainly something obvious in the gruelling seven-minute opener “Forgive”, where sluggish guitar licks and grotty percussion threaten to be overwhelmed by what quite literally sounds like an oncoming storm heralded by the typically grey skies of his London home.

The first half of the album continues along much the same course. “Rims” plods along on the most basic of beat structures, “Contagious” sounds almost like a weary parody of what you might expect of an Actress track, as a collage of percussion and comically pitched down vocals tumble uncomfortably like soggy cardboard in a breeze. Although “Birdcage” and “Our” offer some feeling of hope with their more light-hearted melodies, they still sound mired in a quicksand of Cunningham’s deliberate making. If his intention really was to write an album which reflects as he puts it the “darkness of human nature”, then he’s succeeded – Ghettoville isn’t just a difficult album, it’s an exhausting one. While Cunningham’s best compositions sound like musical Rubik’s Cubes that shift themselves frustratingly out of mental reach just when you think you’ve managed to get a lock on them, Ghettoville has little such depth, concerned more with what’s sitting on the surface of the tracks than any kind of structural twist and turn underneath.

It’s not until the ninth track – the quietly euphoric “Towers” – that some of that sense of intrigue starts to manifest itself. Rather than simply rolling forwards, its interior synth line simmers in a similar way as his Splazsh opener “Hubble”, shifting uneasily inwards on itself. The brilliant “Gaze” meanwhile has the same effect on your ears as weary eyes adjusting to the morning light; a jumble of house, techno and hardcore boiled down to crusty mineral deposits, it sounds like three conflicting tracks playing over the top of each other – the stabs don’t even sound quite like they’re in the same key as the underlying chords. Both “Skyline” and “Image” are similarly energized, offering the kind of skewed takes on techno and synthpop that made Splazsh so vital.

Unfortunately, this kind of energy is largely absent from Ghettoville; rather than play with the structure of music, Cunningham plays with the surface, infecting it with a sort of rising sickness and malaise demonstrated by his constant manipulation of sound. This corruption is present throughout the album; “Street Corp” skips and crunches as if an imaginary stylus is steadily corroding the surface of its ambient chords while many tracks sound like 45rpm tracks played at 33. The only instances of vocals – in “Donat”, the crumpled R&B of “Rap” and mouldy chopped and screwed pastiche of “Rule” sound like diseased gases floating out of rotting corpses. Where previous albums from Cunningham have offered wonder, Ghettoville offers only an uncomfortable mirror of a crumbling society, with a collection of tracks worn down just as buildings and communities have been left to decay in a world post-financial crash. It’s for this reason that it’s difficult to completely write off Ghettoville; what it lacks in Cunningham’s usual escapist structures of cubist sound, it does at least replace with a quite honest representation of how he views modern society.

Much has been made of how Ghettoville offers “the bleached out and black tinted conclusion of the Actress image”, with some taking it to mean that Ghettoville will be Cunningham’s last album. Although Cunningham’s recent words might suggest otherwise, it seems that at the very least this album was a necessary process for Cunningham. The word “conclusion” can mean an ending, but it can also mean completion, an exploration of Actress’ darkest side, necessary to illuminate those personalities seen throughout his other works. If it is an act of completion, one would hope that Cunningham will use Ghettoville as an opportunity to begin anew, because on the basis of the prevailing mood here, it doesn’t seem as if there is anywhere else the “Actress image” can be taken – or even if Cunningham wants to continue to exist in its skin.