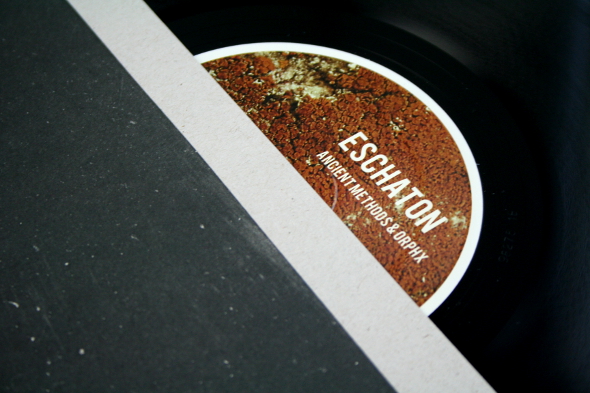 Listening to some of the releases flying under the resurgent hard techno banner, it’s easy to believe that if you wait long enough, pretty much anything will come back into fashion. Such a high proportion of the contemporary releases share the same lack of artistic quality as late 90s loop techno that the only conclusion one can draw is that a new generation are now making questionable production and record-buying choices.

That’s not to suggest that age guarantees creative prowess – some of the dodgiest releases are coming from old hands who really should know better. Thankfully, acts like Orphx and Ancient Methods who have been around the block a few times, are constantly refining their sound. In both instances, this has manifested itself in a more considered approach – witness Orphx’s series of releases on Sonic Groove and Ancient Methods’ recent solo act remixes.

For this collaboration as Eschaton, they seem to have gone back to basics. “Seven Signs” is the only hint of a more reflective sound from either party, expressed through dubbed out drums and, in the second half of the track, a trancey climax. Elsewhere, the sound is more brutal, “Kali” is a maze of wiry rhythms and jagged edge percussion, so relentless that midway through what could be identified as a wounded, wild animal lets out a series of screeches.

“Degenerate” is also relentless, although on this occasion,  the kind of sinister textures that Orphx used on Black Light serve to offset the claustrophobic broken beats of Ancient Methods. There’s no such concession on “Age of Iron”. Apart from being one of the most aptly-named tracks of recent years, it features kicks so hard and filters so overwhelming that it sounds like the accompanying percussive shards are being sucked through an out of control wind tunnel. Only the hoover bass belching out black tones keeps the arrangement grounded in this dimension.