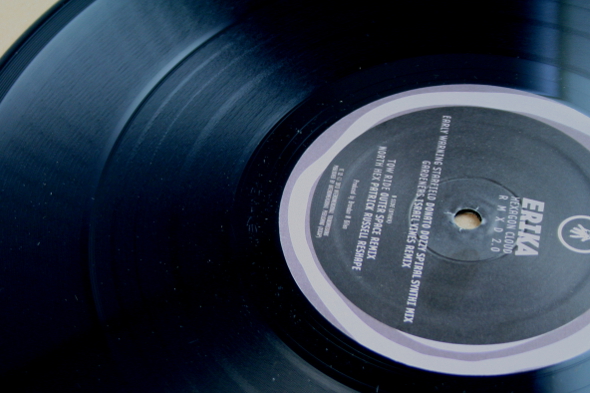 For those living outside of Detroit, Erika may be a relatively new name. But in the Motor City, Erika Sherman is a long-recognised figure of a hardcore underground electronic music community. Her debut solo album, Hexagon Cloud, released last year was preceded by a remix 12” featuring reworks by Orphx, and Detroit locals Marcellus Pittman and Brendan M. Gillen doing his BMG thing. Gillen, who oversees the long running Interdimensional Transmissions label also produces with Erika in Ectomorph, an electro group he formed in 1995 with Gerald Donald of Drexciya in an attempt to make Detroit music for Detroit, ‘not for export’. When Donald left Ectomorph, Sherman was handed a 606 and asked to join, which she did with Brian ‘DJ Godfather’ Jeffries and Carlos Souffront, a Detroit DJ rumored to have one of the most extensive acid record collections going around.

Production-wise, Sherman’s approach is analogue to the bone, which you can hear in the primal framework, flow, and constructed sound designs of her music. But it’s produced music that’s made to sound good; not too raw, hissy, or overly lo-fi. For 15 years Sherman’s also run her own ‘freeform radio show’ – a format of air play defined by Wikipedia as giving a disc jockey total control over what music to play, regardless of genre or commercial interests – called erika.net, which her website attests: “We are entirely non-commercial. You will never hear advertising in our stream. Ever.” So it’s with an introduction like this that Erika Sherman should be known as the real deal – and that she deserves all the recognition she can get, especially from across the Atlantic and beyond.

Off the back of his seven reinterpretations of “Vaporware” by Chris Medak, the artist formally known as Bee Mask, it’s no surprise to see Donato Dozzy choose the album’s ambient track to remix. He does so by turning the insectoid buzzes and analogue gurgles of “Early Warning Starfield” into a spiraling loop of harmonically confused noise, underpinned by a moaning bass pulse. Israel Vines transforms the phat-808-funk of “Gardners” into a deep and rattling techno track humming with the same innate rawness of the original, while Outer Space’s colour-up of “Tow Ride” injects so much ramping Benny Benassi-styled bass into their remix that it’s three-dimensional, or as Gillen and Sherman might call it, an interdimensional transmission.