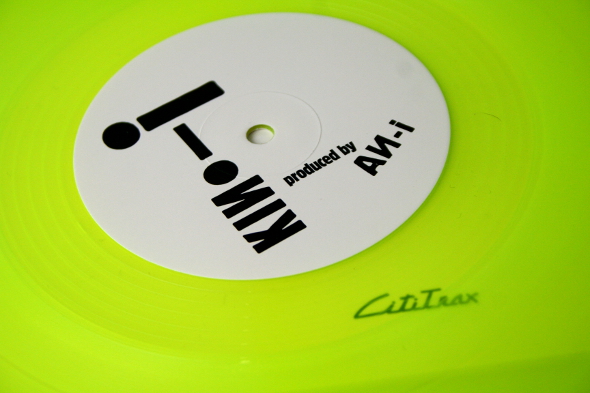 Doug Lee’s arrival on Cititrax under the An-i guise has been eagerly awaited (at least personally) since it was first alluded to by Veronica Vasicka on Beats In Space last year, and there’s always a sense of satisfaction when such anticipation delivers as it does here. A few words of warning – listening to the three tracks on this fluoro yellow 12” for the first time can be a draining experience, your senses under threat of getting beaten to a pulp in a manner similar to some ill-advised sparring with a Klitschko brother. These are undoubtedly tracks geared toward the more open minded clubs and its little surprise that the more abrasive selectors out there – think Morelli, think Traxx – have been beating down sound systems with them for some time.

Those reared on Doug Lee material as part of The Stallions or TBD may be wondering how the Berlin-based producer arrived at this point, and perhaps a move to the German city in the last 18 months has played its part. The signs were definitely there with Bad News, the seemingly one-off project Lee undertook with L.I.E.S. boss Ron Morelli over the summer of 2012 before decamping to Europe’s techno capital. However, whereas “Real Bad News” sounded like the pair just about containing all out machine malfunction, aside from a mid point freakout, Lee’s work as An-i is dominated by the feeling of chaos unfolding and consuming all before it.

The Kino-i 12” nominally features three versions of the same track, and it’s the lead version that hits the hardest with an opening recycled drum machine loop allowed to reach around 28 bars before the madness takes effect. Whilst all manner of straight to tape, improvised music has been issued over the past 12 months to the extent it’s now a point of reference on one sheets, it’s hard to recall any music from this period that sounds quite as gleefully deranged as the ensuing eight minutes of “Kino-i” do. The manic screams that echo throughout recall DAF or Nitzer Ebb with the latter’s iconic “Join In The Chant” a good reference point for the mood Lee is trying to capture, though the end results are like that EBM classic coming apart at the seams.

The accompanying dub version sees Lee dicing off a few minutes and placing more emphasis on the jagged, acid fuelled arpeggio that you probably didn’t fully notice in the main version. With some of the layers of madness peeled away, this dub version is much more concerned with a sense of forward momentum and it’s easy to envisage a lot of DJs pulling for this version. Still, there is a point midway through that Lee seems to lose control of his machines in a manner that references the unbridled chaos of the A-Side. A final Beats version is less the drum arrangements stripped of other elements and left bare as a DJ tool, more the sensation of them being ripped apart, mangled and compacted, much like the T-800 meeting its demise at the end of The Terminator.