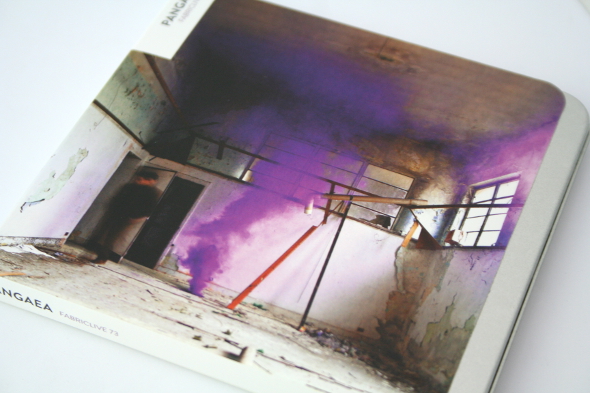 For someone whose DJ alias is based on a massive 300 million year old supercontinent, it’s not surprising that Pangaea (Kevin McAuley) is interested in big spaces. After crafting Resident Advisor’s 333rd podcast back in 2012, he provided some pointers on the atmosphere that inspired the mix, stating that it takes place in “this imaginary location. It’s remote, outdoors in the countryside somewhere and the weather is nice… there’s a great sound system, space to move….”

McAuley’s latest project mixing Fabriclive 73 seems like a natural choice for the young UK producer, putting those utopian ideas about physical spaces that allow unhinged movement to work in an attempt to open up the sometimes suffocating confines of the club. That’s not to say that techno isn’t fun when it’s claustrophobic: Levon Vincent’s excellent reverb-soaked productions sound like they’re bouncing off sweaty concrete walls even when you’re listening to them on headphones. But Pangaea’s motivation with this mix seems to be just the opposite of a crowded room: It’s a series of sweeping soundscapes with the potential to take you out of the club space and up into the clouds.

This spaciousness partially due to McAuley’s smooth mixing techniques. Compare Fabriclive 73 with the Boys Noize-curated volume before it, and you’ll notice some immense differences. While Boys Noize’s Alex Ridha was intent on a torrential series of drops and build-ups, McAuley’s approach is much subtler – blending three or four tracks together into one singular, almost indistinguishable movement. It’s demonstrated expertly early on in the mix, when Hodge’s ghostly “Resolve” mistily transitions seamlessly into the barely-there slinky trumpets and bongos of Shifted’s “Untitled B2”.

There’s a confidence at the heart of McAuley’s selection which really shines through in Fabriclive 73, as tracks organically melt into each other. And it’s not just because they’re all thumping, easy-to-mix 4/4 techno either. McAuley plunks MGUN’s dissonant “Blunt Run” next to the bewildering bass scales worked by The Sun God’s “Maum” and somehow makes the two renegade cuts sound like a natural pairing. But it’s not until Mumdance and MAO’s “Truth” kicks in – and where the consistent kick-drum thump of techno suddenly cuts out – that things get really heated, with a percussive torrent of yells and grunts forming the heart of the risqué and rewarding DJ tool. It’s the first real eyebrow-raising “what the?” moment on the mix, and, it would be wonderful to get a few more of those weird, amazing, unexpected little bursts of energy throughout.

However, while Pearson Sound’s “Starburst” is the only previously-released Hessle track appearing in the mix, it’s presence is still a memorable point –  the heaving sounds of thumping saw-blades forming some gorgeous dissonance with the spacy, ambient sounds of Adam Jay that precede it, and the jaw grinding tweaker-acid of Kobosil’s “Osmium” that follows. From there, things are brought back down to a simmer until the fantastic Exposure remix of Speedy J’s “Something For Your Mind” unleashes the mix’s second real high point: a barrage of clashing cymbals, that classic female voice repeating the track’s title in a Cruella Deville-esque drawl and a hypnotic, repetitive thump that all but guarantees floor-stomping.

In that same Resident Advisor interview mentioned earlier, Pangaea was asked about why he feels an affinity for techno. Responding, he calls it the most “open, creative, exciting, yet functional space to work in”, again using wide-open geographic descriptors to talk about music. This sense of possibility and expansiveness sinks in one final time when Marco Shuttle’s “I wanna dance… in Outer Space” comes on in the last fifteen minutes, its softly-tapped high hats and spacey morse code patterns, tearing the roof off the club, knocking its walls into a pile of debris, and flinging the listener into the vast expanses of the cosmos.