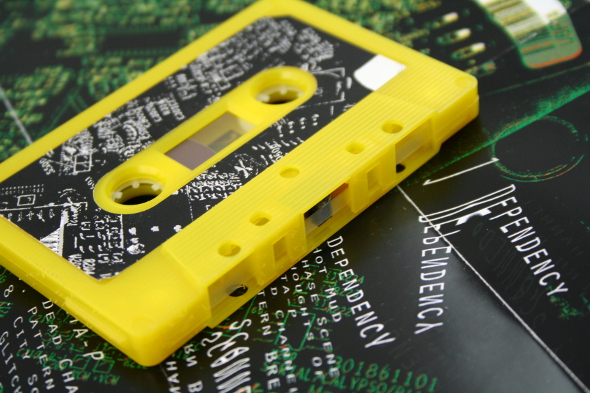 If there is one great thing about the cassette revival, it is surely the platform it gives to long-form and willfully obtuse musical exploration. Where a side of vinyl will forever have the potential for club use no matter what the content, the tape is destined to be listened to with a clandestine air around it, the detuning shelf-life of the medium lending itself to degraded music. There is after all a reason that a vast majority of the music released on tape these days appears to be lo-fi industrial, drone, noise and other such avant-garde concerns.

With their sixth installment Bristol’s No Corner crew are not quite in those grimy extremes, but they still equally value the creative compulsion that tape inspires. Loosely affiliated with the Young Echo crew (via previous releases from Jabu, Kahn and El Kid), there’s every chance that the mysterious Lily hails from the West Country as well, not least with one former solo release on Idle Hands as well as an appearance on Spargel Trax. Compared to the more concise outings Lily has had in the past, on Modern Malaise the artist is stretching themselves out over two twenty minute sides with a collage of tracks that unfurls as though it were stream-of-consciousness despite the fact that each individual segment is a fully realised track.

The opening of Side A does come on like a slow-grinding industrial nightmare redolent of the wider tape cognoscenti, but this quickly gets balanced out by lighter string-led fare that calls to mind the hopeful bombast of Art Of Noise. With a smart speech sample as a segue this opening balladry gives way to a steady but busy techno fuss that sounds distinctly wrought from machines and jammed out with a roughshod attitude, albeit impeccably produced perhaps after the fact. Whatever the method, there’s a fine balance struck here between the instinct of jammed performance and well-defined sonic attributes, everything sounding gritty even as it all sits in its own space in the mix.

In a swift chop one of the tape’s most distinctive sections takes hold, a driving slap bass sample that sits stark amongst drum machine ruminations, distinctly 80s in its origins but given a new lease of life in this dystopian 4/4 throwdown. As the sound palette of the cassette ever-broadens before the first side is through, a tribal roll of percussion takes hold and the space widens out from claustrophobic urban unease to an open savannah of African electronics as psychedelic as it is grooving. It’s a spellbinding concoction that sneaks up on you, and as it fully sinks in comes the dawning realisation that this is a body of work with serious depth and finish rather than some trite collage of sonic doodles.

Indeed it’s hard to work out how Modern Malaise might have taken shape. It moves like an impulsive stream of consciousness, and a cursory surface listen lends credence to that fact, but in immersing in the twisting and turning sound world it becomes apparent just how much detail is in there. There’s no hiding behind distortion and grit here, simply wielding it at appropriate times in a much greater context. In fact Side B kicks off in such energetic, well-defined form it seems criminal it isn’t appearing on wax. From a Larry Heard-flavoured house cocktail to stomping pan-pipe acid (no, really), there’s a lot of muscle being flexed with the dancefloor in mind, but that in turn creates one of the distinctions of music made for tape. The knowledge that this will not get blasted out over a booming system (bar one rigged up to a tape deck) makes it sit differently in your ears, enforcing that ‘listening experience’ notion and bringing the textural subtleties, emotional intonations and rhythmic kinks to the fore where a hungry club feels only a groove.

In that way Lily has created a perfect techno album, captivating and catchy just as it is raw and adventurous. That it drapes itself in unspecified tracks across two equidistant sides of tape makes that album definition even stronger, let alone the hyper attention to detail that reveals itself with further listens. One can only hope that enough people will pay attention to a low-key cassette to get this stunning music the recognition it deserves.