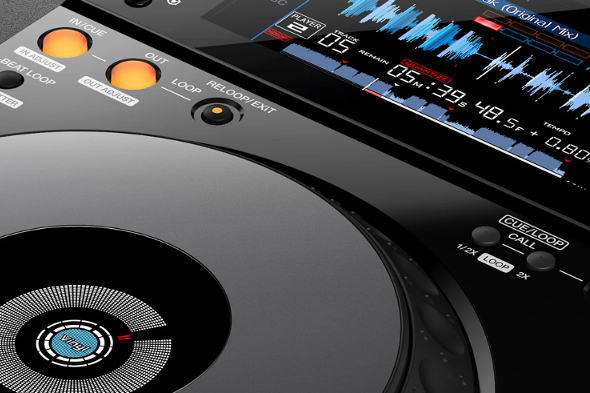 Rob Lee looks at Pioneer’s latest round of updates in the form of the CDJ-900NXS media player and Serato-focused DJM-900SRT mixer.

Pioneer are a name synonymous with popular, practical DJ hardware solutions, and for a generation now they have become the household brand for CD decks and media players. It seemed that they had finally outdone themselves with the introduction of the CDJ2000 Nexus CDJ media player a few years ago, but they have continued to improve and update their designs, the most recent of which is the CDJ-900NXS and DJM-900NXS mixer which both take Pioneer further into the ever evolving realm of digital DJing. 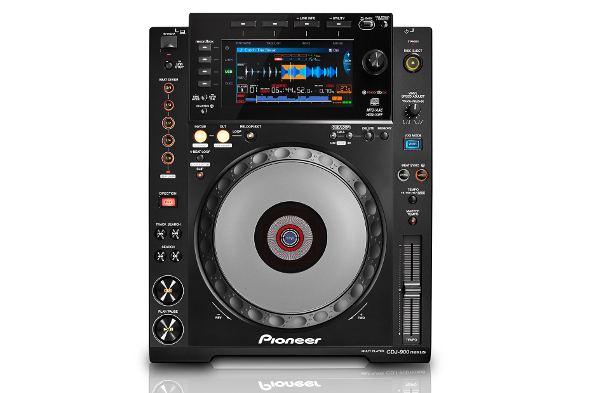 First up is the new CDJ-900NXS media player, which includes advanced features found on the upscale CDJ-2000 Nexus, including the ability to load music via WiFi. This technical leap is achieved by connecting your CDJs and mixer to a wireless router via LAN cables and then loading sounds stored on your phone, tablet, computer or laptop by way of the tried and tested Rekordbox application. Similarly, you can connect your smart phone directly to the deck using the USB port, which will simultaneously charge your phone and allow you to load music from the Rekordbox software, which is free to download (just make sure you put your phone in flight mode before starting your set to avoid any embarrassment).

In addition, beat divide performance buttons are clear and present on the CDJ-900 NXS, allowing the DJ to slice and roll beats in an intuitive manner. Also present is the simple loop control that can be found on all CDJ models with the added bonus that you can enable a four bar loop at the touch of a button on the new 900 NXS model. Solid and reliable performance features including the beat divide buttons found on CDJ-850 and 900 models allow the DJ to slice and roll loops extending to the slip mode that is only found on the flagship 2000 Nexus model. 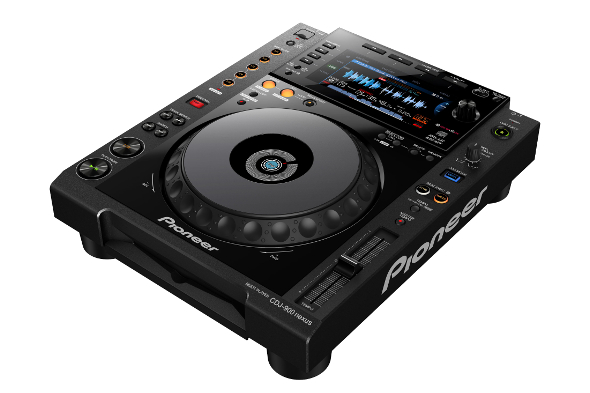 The CDJ-900NXS’s place within the Pioneer hierarchy suggests that it is being billed as the more affordable version of the CDJ-2000 Nexus. But a quick comparison reveals that they haven’t really taken much out in the way of features. In terms of media, the only format that the 900NXS doesn’t support is SD cards. Both players feature a full colour display, and although the 2000 Nexus sports a slanted LCD for more comfortable visual feedback, the 900NXS actually has a full centimetre more width and height than its older sibling. In terms of control there is very little to separate the two decks, save for the omission of the needle search strip that can be found on the 2000 Nexus, and if you delve further into the specifications of the two machines you find that the 900 NXS model beats its sibling in power consumption and distortion percentage as well as being lighter and leaner.

In defence of the 2000 Nexus model, it has a better build quality; the buttons are more sturdy and the mode function control buttons around the display are bigger and more clearly labelled, as well as having the convenient jog wheel tension control for setting up the deck depending on personal taste. Whether or not the difference in build quality is worth the not insignificant £450 price difference remains to be seen, but if Pioneer wanted to appeal to the more budget conscious of us whilst retaining all the great connection features of the top of the line model,  then the CDJ-900 NXS is a step in the right direction. 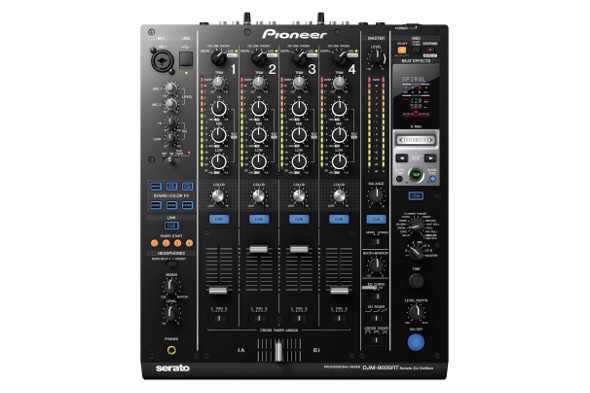 With Serato discontinuing support of Scratch Live with a mind to putting all their weight behind the Serato DJ software, the last few months have seen a flurry of Serato focused DJ controllers hit the market from Pioneer such as the DDJ-SP and DDJ-SR. Despite Pioneer’s domination of the Serato controller market, the company have otherwise been lagging behind Rane, who until now have been the sole manufacturers of proper DJ mixers with plug and play Serato capabilities. The DJM-900 SRT mixer is the only DJ mixer currently available – apart from those from Rane – specifically designed for use with Serato DJ.

If you are familiar with the DJM-900 Nexus then you will be pleased to hear that Pioneer haven’t tried to change too much, with a layout and basic feature set being largely the same. Cosmetically the only thing to distinguish the two models is the blue backlit cue and beat FX toggle buttons on the SRT version. The other conspicuous difference is in the way that the source selection switches are labelled. Instead of all of the channel numbers and deck numbers matching up, Pioneer have opted to leave USB decks three and four on the two outside programme channels (one and four), with USB decks one and two on the inside channels (two and three).

There has already been some disquiet about the seemingly illogical way the layout has been organised, but if you are using Serato in an integrated setup with audio coming from CDs as well as vinyl then the layout seems to make more sense. In addition, all of the faders and a large portion of the controls are able to map via MIDI if you wish to turn your mixer into a controller. The Magvel cross fader and programme channel faders are designed to be durable, and their offset mechanism –positioned to one side of the faceplate – helps in minimizing the effect of a spilled drink or excess dust.

There is a minor niggle in the fact that there aren’t two USB ports for more seamless DJ transitions, a design feature that gives the Rane 64 and the SL4 breakout box a distinct advantage. Although the Rane mixers tend to be designed for turntablists and battle style DJs rather than club DJs, the Rane 64 also features five stereo inputs and six stereo outputs, beating Pioneer’s four stereo ins and five stereo outs. But if you throw the standard Pioneer beat FX, sound colour FX with auto BPM, tap tempo and beat slice touch pad into the mix then the balance becomes a bit more competitive.

The DJM-900 SRT comes with two DVS control vinyl records and two control CDs as well as the latest version of Serato DJ, including drivers, meaning that with this new mixer you have everything you need to dive straight into a Serato mix session. However, two USB ports, for seamless DJ changeovers, would have been the icing on the cake here.