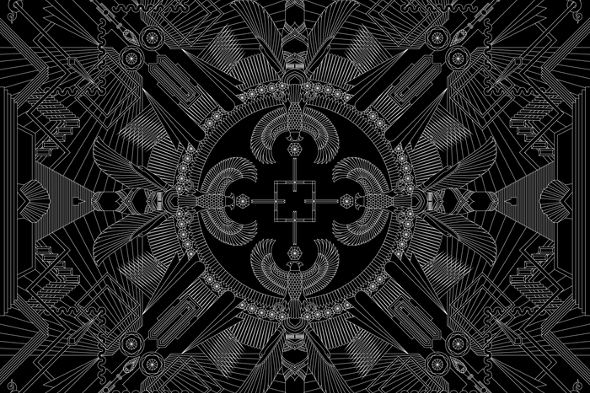 At this point in the development of Antinote, the identity of the Parisian label is becoming a little more tangible. That’s not to say there is a pre-conceived style to be adhered to, not least when many releases have been mined from previously discarded archives, but rather that there is a certain spirit that embodies the music released thus far. It would be churlish to ignore the African influences in many of the releases, most explicit with the Albinos records, but also pleasingly apparent on this latest missive from Iueke, otherwise known as label co-pilot Gwen Jamois.

As well as exotic and ethnic influences, it’s clear that a searching analogue psychedelia runs through the imprint, and yet the material manages to be direct and unfussy in its final delivery. It’s a curious cocktail, but one that serves to embolden the allure of the label as it starts to gather some serious clout both critically and creatively. Having provided the starting point for Antinote with the Tapes 12” back in 2012, Jamois is back for his third appearance on the label with a new salvo of tracks unearthed from dusted-down spools recorded as early as 1991, and his sound is no less enthralling this time around. Reportedly these three jams were all the product of a single night spent busy at the machines, and it shows in the consistency amongst the tracks.

The A side of the release is given over to the lengthy sprawl of “Tape 4”, and it’s here that you can hear that whisper of Kwaito that seems to keep popping up on Antinote. It’s a ghost caught somewhere in the harmonious hum of the toms, possibly calling through a ring modulator to add a level of natural vibration on top of the percussive sound that roots the electronics in a more spiritual place. This tribal mantra calls out insistently, while the first four minutes of the track fill up with passing sweeps of dystopian pads and scattered after-thoughts of hats, snares and claps. It’s a sterling example of minimal techno before it became self-conscious about its reductionist values, staying simple and deadly but never dull. With that rock-solid anchor of kick and toms, the rest of the track is given over to impulsive whims of drum patterns and synth doodles, kept low enough in the mix to avoid throwing the cut off course.

On the flip side, “Tape 4.1” does that magnificent techno trick of starting on an indecipherable rhythmic pattern that only makes sense when the kick comes in, some 5/7ths away from where you expected it to fall. There is an equally sparse and haunting tone to the A side at work on this track, but here a more discernible melodic element emerges in the shape of a lute-like figure that runs throughout, injecting some much welcome Eastern mysticism into the heads-down hypnotism. Too there is a greater sense of structure to the track, marking out specific peak and trough points to make for a more balanced experience compared to the mellifluous ride of “Tape 4”.

Things are no less entrancing on “Tape 4.2”, with yet more of those snaking patterns calling up a spiritual atmosphere this time buoyed by a grainy, filtered pad tone that undulates underneath the percussive notes. In the increasing intensity of those melodic hits and the nebulous swells it feels as though there is more happening as the track whirls towards a conclusion, but in truth the trick remains as satisfyingly simple as with the rest of the record.

At number seven in its burgeoning series, Antinote has successfully reached the point of releasing a record that is typical of the label and that is no discredit to the music. When something has been crafted at least twelve years before, there can be no whisper of premeditation about it. Instead the curatorial instincts of Jamois and his partner Quentin Vandewalle come to the fore, drawn to the spiritual incantations that the stripped down, beguiling techno tracks impart. It’s certainly not an easy message to ignore, and one that looks set to command attention towards Antinote for a long while to come.