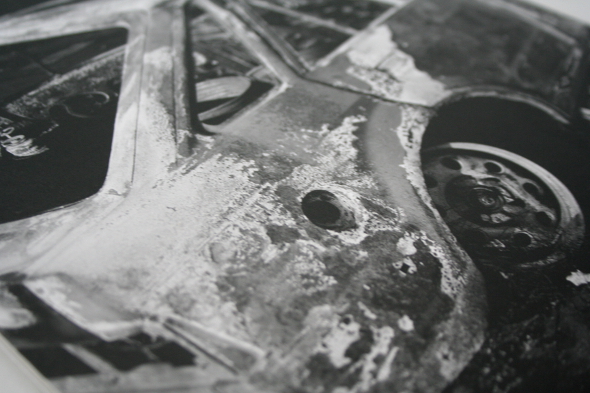 Even though 2013 found The Trilogy Tapes seeing the most releases to date, there’s still a pervasive mystique lingering around the label. Maybe it has to do with the starkness of their imagery – you’d be hard-pressed to find a label with more consistent visually arresting imagery: the eerie Japanese folk art of Rezzett’s EP and the sleepy-eyed lion adorning Anthony Naples’ early 2013 El Portal are serious contenders for the best covers of 2013, exuding a mysterious, sometimes menacing, unnameable symbolic importance. Or perhaps it’s Will Bankhead’s minimalist approach to publicity. Sometimes releases are hinted at with a photo of a test pressing and a sentence on the TTT blog, but just as often they’re birthed without any prior notice, giving both a welcome sense of unpredictability and a gnawing fear that perhaps the release has already sold out.

So it’s appropriate that the fifteenth 12” release on TTT involves a figure who very much embodies this slightly sinister mystique in Oliver Vereker. His grainy video work for L.I.E.S artists Two Dogs In a House and Mutant Beat Dance is already well documented, and the same lo-fi noise influenced aesthetic is evident in his gravelly techno excursions. If there’s one thing that Vereker’s clutch of productions for L.I.E.S have honed to a tee, it’s the ability to emulate the suffocating fear that small, dimly lit spaces cause for some.

“Slain” imparts the paranoia of playing one of those 90’s corridor-navigating 1st person shooters in the early days of shareware and hearing the demonic grunts of the cyber-demons that hell knights lurking around the corner, just out of sight. A deceptively slow-paced stomper with a bass rumble that recalls an upset stomach, it expertly jitters its way through six minutes of ambient thrumming, intensified by the barely-human utterings that are mouthed overtop.

There’s also some inhuman noises tracking “Untitled”; the vocal’s from Cybotron’s “Clear” sung with a mouth full of swamp water. While “Untitled” takes its time building up a clanking rhythm, it explodes halfway through with an unexpected obtuse acid line barrelling into the track’s centre for a brief second, and then back out again. It’s not a floor-killer by any means, but Vereker is becoming more adept at ratcheting up the tension throughout his tracks with every release.

The opening minute of “Marked” swaps acid house for a glitchy improperly tuned radio hum, crackling with electrical static like a piece from Rene Hell’s recent Vanilla Call Option LP – but then a rust-caked drum machine kicks into effect and the track springs to life, a muddy workout of claps, acid hats and noise. It’s the track on the release that captures the pure, raw improvisational energy that Vereker spoke to Scott Wilson about earlier this year, and would take the cake as standout on the EP were it not for “Untamed”, which gives off an organ-rattling, bassy warehouse growl that sounds completely unlike anything else on the EP.

Here, Vereker fully indulges in the gritty dilapidated joy of scuzzy warehouse rave, sounding like a thunderstorm filtered through an MPC, infusing tiny elements of hardcore-leaning distortion throughout. Vereker’s latest is a feather in the cap of The Trilogy Tapes crew, who continue to uproot predictability with every offering – much like the open window on the EP’s cover that leads to a pitch black room, it’s always near-impossible to imagine what’s inside.