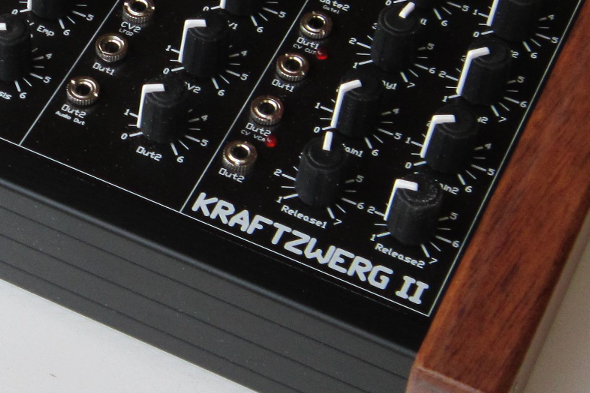 Rob Lee investigates MFB’s reboot of one of their popular synths, the Kraftzwerg II.

MFB are an intriguing presence in the analogue synth marketplace. They have been around since 1976, but seem to have only gained wider popularity in recent years. In true boutique synth style, MFB is the brainchild of a single engineer, in this case Manfred Fricke, who began introducing low cost drum machines, in kit form, in 1979. The first offering, known as the 98DM, was followed up with the MFB-501 drum computer a year later, and rumour has it that this compact drum machine actually outsold Roland’s TR-808 in some parts of Germany.

After developing digital sequencers, drum machines and MIDI-CV converters in the mid 80’s, MFB mysteriously dropped off the radar until they released the MFB-Synth some years later, and it’s in the MFB-Synth II that the original Kraftzwerg (which appropriately enough means powerful dwarf in German) had its roots. The Synth II and the Kraftzwerg both share three VCO’s, two ADSR envelope generators, a 24dB low pass filter and two LFOs, while the Synth II also featured patch memory with space for 50 presets and 49 user sounds as well as a 32 step sequencer with space for storing up to 25 sequences. The Kraftzwerg ditched the memory and sequencer in favour of 37 patch connections that allow you to modify set routings rather like you would on a fully modular synthesizer.

Being semi-modular, the Kraftzwerg made a sound without any of the 3.5mm patch points being connected, the idea being that the possibilities available by re-routing the signal flow will lead to ever more imaginative and unique sounds. The original Kraftzwerg did however lack an internal glide feature, none of the three oscillators featured a sine wave and it wasn’t possible to manually change the pulse width of the square wave. There were also small gripes regarding the amount of heat the unit generated, but regardless of these issues, it was a powerful unit that packed a lot of features into a very small space. 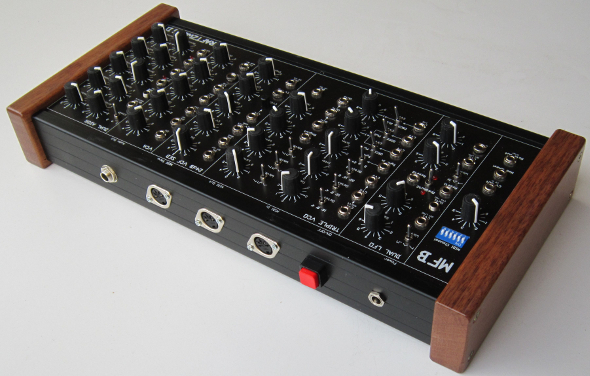 With the all new Kraftzwerg II, the first improvement to be noticed is the addition of an internal glide control that allows you to slide between notes. The single knob control allows you to get to grips with the speed of the glide rate, while other improvements include a 1/4” TRS output (as opposed to the 1/8” jack on the original machine), and a much more luxuriant housing that now includes wooden sides to contrast the aluminium face. Perhaps less obviously, MFB have improved the 24dB low pass filter and enhanced how the VCOs deal with temperature change. For the most part however, the rest of the design follows the standard laid down by the original unit. There are three oscillators that each have the choice of triangle, square and saw wave forms with the range of VCO one and two being switchable between 16′, 8′ and 4′ and the third VCO ranging from 32′, 16′ or 8′ making full sub and bass frequencies available.

A lot of attention to detail has gone into the tuning possibilities in the oscillator section, and evidence for this comes from the fact that VCO one can be fine tuned +/- a fifth, with the fine tuning of VCO two and three stretching to +/- an octave. Precisely tuning each oscillator can be a tricky operation, as is the case with all analogue synths, but in this case the operation is aided by the fact that the VCOs are tuned automatically on powering up the unit. Although you can hard sync all three VCOs if needs be, it is advised to allow the synth 10 minutes to warm up first. In addition, there is a noise generator for adding some airy grit to any of your creations.

The original Kraftzwerg synth had a cascade-type filter that was said to give it a distinctly Moog-esque quality, but this time MFB have opted for an SEM filter that is more akin to an old Roland filter, and to this end the new unit does offer a lot of control, allowing you to create both subtle and smooth filter sweeps all the way to screaming distortions. The VCA section controls the volume output of the synth, and along with the VCF section there are plenty of patch points and knobs for modulation using the two LFOs. The dual ADSR envelope generators include a hold stage directly after the attack stage making thick percussive sounds sounds available by holding the output at maximum before moving into the decay stage. ADSR 1 is controlling the VCF and ADSR 2 commands the amp contour of your sound in the Kraftzwerg II’s basic operation and coupled with the noise generator it’s possible to get some convincing retro hi-hat and snare-type sounds. 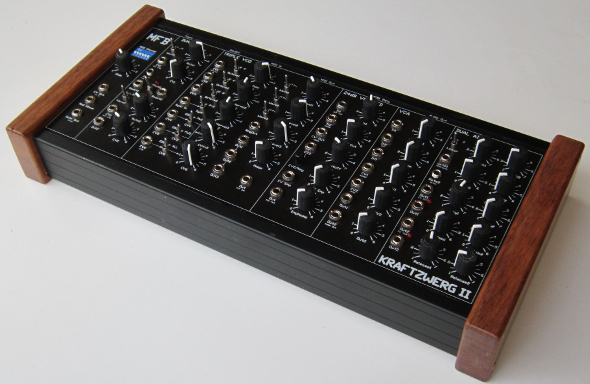 The modulation possibilities on the Kraftzwerg II are far and wide with two LFOs sporting saw, square and triangle shapes, and saw, triangle and random shapes respectively. Also new on the rebooted Kraftzwerg is the possibility to sync LFO 1 and LFO 2, and give LFO 2 a one shot function, making it a kind of spare envelope all of its own. With 40 patch points on the front face, the modulation possibilities are endless, making this unit a daunting beast for analogue synth newbies and a vast frontier of discovery for veterans. The unit comes with six patch cables, which is more than enough to see even the most complicated of patch experiments through, and even though the instructions provided by MFB are brief by any synth owner’s standards, the clearly marked patch points, knobs and switches soon begin to make logical sense.

Even though the three VCOs are still lacking a sine wave (a major drawback for some analogue aficionados), and you can still only control the PWM by patching in one of the LFOs, there is a huge palette of possibilities available from huge muscular bass sounds with plenty of gritty traction, soft airy string like tones, full bodied percussive plucks, biting leads and sound FX only limited by your imagination. All of this comes in a very small yet sturdy 33cms x 17cms x 7cms box, making it an ideal travelling companion or perfect for studios with limited space.

The Kraftzwerg II has some rivals, the most obvious would be from countrymen Doepfer, whose Dark Energy II synth also features similar MIDI and CV options, but features USB control too. The clear advantage with the Kraftzwerg unit is that it features three VCOs as opposed to Doepfer’s one, and though slightly more expensive, the justified price difference means the Kraftzwerg edges out on top. It’s easy to find plenty of analogue mono synths these days, such as Novation’s Bass Station II,  Arturia’s MiniBrute and the Mopho from Dave Smith Instruments, all of which come in cheaper than the Kraftzwerg, however the real value of this rebooted synth from MFB comes in its semi-modular design, which makes it a much more comprehensive sound designing tool. With its compact size and 40 patch points, there is an added dimension of flexibility to what can be achieved with this powerful synth.