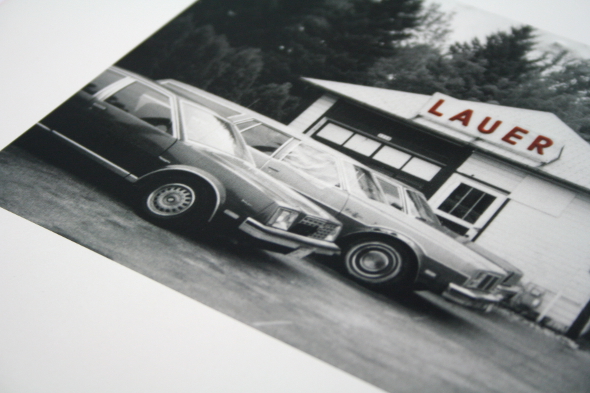 This Laui XIV 12” sees the hirsute pair of Phillip Lauer and Gerd Janson return to their more familiar working relationship of artist and label boss after time spent together developing their Tuff City Kids sound. A second EP of original material surfaced on the Delsin House series, whilst there was countless remixes for a diverse range of labels with everyone from Internasjonal, Phantasy, DFA, Visionquest, and Mojuba blessed with some Tuff treatment in 2013. Presented in typically humorous fashion by Gerd ‘the word’ Janson as “Post-house-proto-disco-trance rockets,” this four track 12” is Lauer’s first solo material since an excellent Beats In Space record in 2012, and fans of the German producer’s work will be swooning from the off.

Distinctive synth lines have been the prominent element in much of Lauer’s most memorable work and there is one present from the opening strains of lead track “Tyler,” floating out from the ether and latching onto a sumptuous 116bpm groove that’s augmented by a lazy 16 bar looping arpeggio that’s reminiscent of a malfunctioning laser gun. Those bemoaning Tensnake’s increasingly commercial inclinations in the post-Coma Cat years would probably find much to savour in this heavenly slab of warm club music, as it’s very evocative of the kind of music Marco Niemerski used to grace Running Back with. An accompanying Beat Mix of “Tyler” discards with the careening synth patterns and exposes how powerful the track’s bassline is, whilst offering a neat reminder of how capable Lauer is of delivering rhythm heavy DJ tools.

Face down and Lauer eases up the tempo slightly on “Boshes” which is an exercise in soaring, ascendant house music with a sense of shameless euphoria. There’s also a degree of melodic progression that creeps up on you, the way that the key stabs come to the fore as the mid point crescendo veers into view and a mildly acidic bassline takes over. It’s Lauer at his best and is the kind of reliable club track house DJs will return to over and over again.

It’s hard not to think of another occasional Running Back artist as final track “Angus” unfurls breathlessly, with some Terje-like touches apparent as the track expands from its dusty rhythmic openings into a hypnotic saunter through, yes,  ‘post-house-proto-disco-trance’ that’s every bit as powerful as Todd’s classic “Snooze 4 Love”.