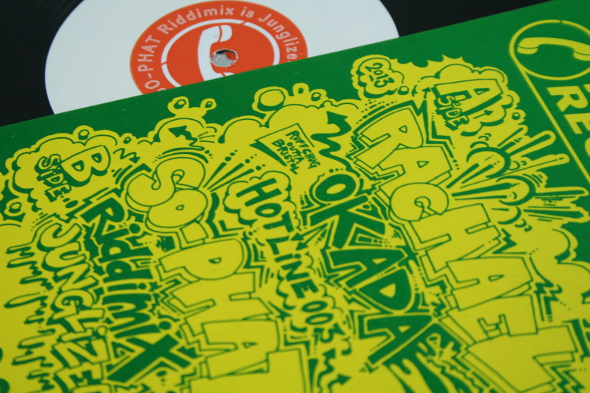 With the first two releases comprised of the devastating Kahn & Neek slammer “Backchat” and Lurka’s apocalyptic “Full Clip”, Hotline Recordings are already onto a good thing in the city of Bristol. There’s no doubting the team behind the impeccably delivered imprint are in a grime-laced love affair with producers in the more guttural sound spheres of their home base, but this is a predilection not limited to purist revival and “Pulse X” knock-offs. For the third instalment on the label eagle-eyed followers of West Country output may well recognise anonymous producer Rachael from an Idle Hands 12” released in 2012, pretty much confirming suspicions that the shadowy figure emanates from the area as well.

However where that previous record delved into bubbling layers of techno synth work and rigid 4/4 grooves, “Okada” is instantly a different beast altogether. In keeping with the Hotline ethos, the track is a short sharp blast of dancehall-wrecking dynamics laden with bass and rasping percussion. This doesn’t easily place it in a particular generic movement though, rather bouncing off of the grime resurgence and adding a curious slant to proceedings. In that sense you could liken it to Kowton’s appropriation of grime ethics, and there is certainly a whisper of his style in those crushing snares, but instead of monochrome malaise and uneasy space Rachael’s sound world is a busy and feisty one that shoves and barges its way into your ear drums while inciting a full-scale freak out in its path.

One of the pivotal weapons in Rachael’s arsenal is the hooky chord stab, discordant and bright as a button as it leers up in your face. When coupled with the strafing synth arpeggios it injects colour and warmth into the track where so many like-minded producers at present are striving for icy tension. This isn’t to say the track is a pretty, fluffy creation, far from it. It’s ugly and brutish as it swaggers around making its presence felt, but beyond the vicious façade the track is buoyant and boisterous; as fun as you could wish for a broken dancefloor belter to be.

On the flipside comes a rather special remix from a man with increasing ties to Bristol, although he comes from somewhere distinctly other to the city. Geographically DJ Sotofett may hail from Norway but in truth his musical existence is a thoroughly singular affair of no fixed abode. If there was any doubt about that, this remix confirms that his approach is not a standard one. As the title “So Fat Riddimix Is Junglized” suggests, this is a jungle celebration that disregards any of that ‘hardcore breaks revival’ nonsense and jumps straight to the task of authentic amen choppery with the kind of savage flair that characterised Squarepusher’s most visceral output. The impulsive dub box samples inject a playful quality while the ethereal synth pads smooth out the rambunctious drum action, leaving just enough room for the stabs from the original to work their magic once again. It’s a unique take that oozes Sex Tags abandon from every grinding sample tweak.

Widening the potential for the label further while keeping a satisfying consistency to what has unfolded thus far, “Okada” is another sure sign that those manning the Hotline have uncompromising taste in standout smashers in a world full of also-rans.