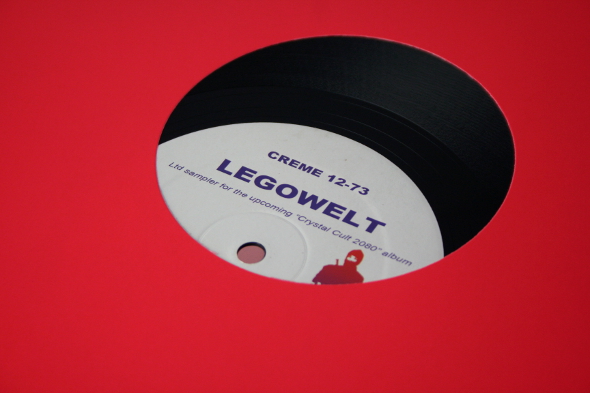 In assessing the recent reissue of Illuminati, Danny Wolfers celebrated work as Squadra Blanco, this writer made the observation that in contrast to this 2002 work, the Dutch producer’s recent output was veering towards the mainstream. That’s not to suggest that he’ll be gyrating with one of his synths on a festival main stage any time soon, but take a listen to last year’s Paranormal Soul album and it’s clear that Wolfers has made his madcap fusion of Italo, Detroit electro and jacking house more accessible, even to the point that his productions are now more DJ friendly than ever before.

Wolfers himself admitted himself in an interview with this writer published on Juno Plus last year that his releases from the early part of the last decade were not given full justice in post-production. Despite this, Wolfers appears determined to keep surprising and confounding. Just when it seemed that his music was going down a specific path, he drops this sampler for Crystal Cult 2080, his latest long player, due on Crème Organization next year. Less euphoric and more tripped out than Paranormal Soul, this sampler showcases Wolfers synth prowess, without all of the regrettable prog rock connotations that that description may throw up.

On the extended dub version of the title track, Wolfers brings forward his hardware to conjure up breathy, dreamy textures that are gradually overcome by 303s piling up on top of one another, while “Do What U Gotta Do” contains echoes of classic house artists like Virgo 4 or Larry Heard, as warm melody lines gradually build up and vocal shout outs are copper fastened to steely drums. Like his Xamiga work with Xosar, what really impresses here is Wolfers’ ability to balance ethereal compositions with a dance floor appeal.

Both “Majestic Alchemy” and “Mistral VHS” teem with textured, dreamy soundscapes and half-heard, indistinct samples – on “Majestic Alchemy”, it sounds like Wolfers has sampled an opera singer – but underneath these elements he adds in drums so pounding and filters so relentless that he doesn’t risk alienating the bigger rooms that are quickly becoming part of his habitat.