Ellis de Havilland – Born out of Cheapness and Frustration Part One 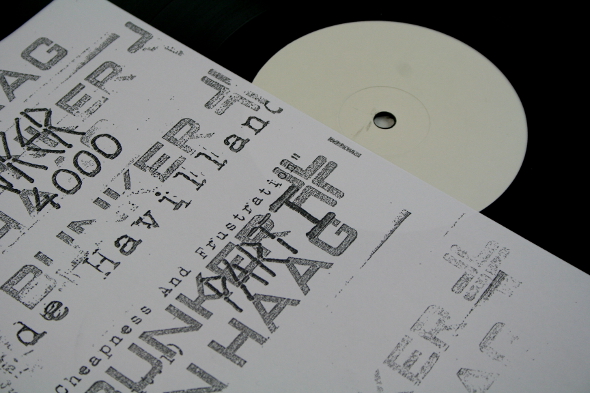 If the story behind the first release on Bunker’s new 4000 series is true, then the Dutch label has succeeded in tracking down some of the most obscure and primal acid tracks. The short version of the back-story behind both parts of Born out of Cheapness and Frustration goes like this: Ellis de Havilland came from a poor background inIndianaand tried his hand at making dance music during the late 80s/early 90s. However, he died of an overdose in the early 90s before any of his work was released. Mysteriously, these tracks were found recently at a police auction in the US and are now being put out for the first time by Bunker.

Even if this elaborate explanation isn’t true, it’s hard not to admire the perverse imagination of whoever dreamt it up. Ellis de Havilland could be the figment of a warped mind, but the music here is very real. The release sounds like it was recorded in a back garden shed; every element on each track is lo-fi and murky, giving the release a grubby feeling. If this is the work of a contemporary producer, they have stripped away any semblance of modern production/post-production techniques and Bunker is its natural home.

Indeed it would be hard to imagine any other label putting out the sleazy sewer acid of “Dirty Mind” or the puerile “Cheap Jam”, where 303 lines play ping-pong with relentless claps. The only track to arouse suspicion that Ellis may not be who he seems is “Fun Stuff”, which is reminiscent of JTC’s filtered drum track “Take Em Off” for Crème Jak, but these doubts subside as soon as the needle drops on “Hussy”. Inhabiting the fringes of Mike Dunn/Steve Poindexter-style ghetto, the production is so muddy that it is hard to distinguish between the snares, drums and bass. It’s not long before these elements merge in a wall of grimy, acid-caked noise, the kicks flickering in and out of time and a crashing cymbal providing the only recognisable guiding point.

No matter who made it or where it really came from, Cheapness and Frustration was destined to end up on Bunker.