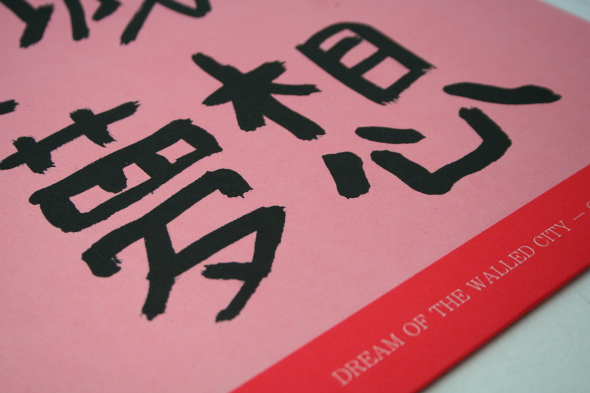 It looked like a stack of hay bales. Not quite an oblong, protruding jankily at the corners, the mush of 300 high-rise buildings seemed somehow organic, amorphous, threatening to expand beyond its boundaries. No one would design something like this. And, in fact, the Kowloon Walled City wasn’t really designed at all. It was almost certainly the largest ‘outsider architecture’ project in modern history, housing 33,000 residents in just 0.01 square miles, in a series of buildings designed and constructed entirely without regulation.

Twelve-storey flats crept in on each other, the majority built as the population began to swell after World War II, never sitting quite at right angles with their neighbour. Above, an endless tangle of hijacked electricity cables and television antennae jostled for position. More than a couple of storeys down sunlight never breached the makeshift alleyways, the majority of the city surviving in darkness until a handful of fluorescent streetlights were installed in the 1970s.

Until 1983 Kowloon was so heavily under Triad control that it became a no-go area for police. The gangs held a vice grip over a booming sex, drugs, and gambling trade, while thousands of residents attempted to lead lives approaching normality in an environment that was anything but. We will never get to experience the Walled City, with it been finally demolished in the mid-‘90s. It has, however, been the subject of many cultural depictions, including Robert Ludlum’s The Bourne Supremacy, in which the city is memorably described as “elevated rubble”. And now, L.I.E.S. duo Samo DJ and Max Stenerudh, recording as KWC 92 (the ’92 presumably a reference to the year in which the final sets of inhabitants were ‘evacuated’, many against their will) have made their own ‘soundtrack’ to the city.

Dream Of The Walled City begins inauspiciously enough – indeed, even off-puttingly so. The record opens with the hallmarks of a dodgy Orientalism – gongs, deep bowed instruments, and Chinese TV samples. Thankfully, though, the rest of the album is satisfyingly less literal, and dramatically more intelligent, in its interpretation of the Walled City. The sense here is both of gloom and of a stark wonder. “Night Drive”, perhaps inconspicuously named as photographs of the city suggest that the majority of its thoroughfares are far too small too accommodate a car, is a motorik trundle full of deep pads and twinkling lead lines suggesting the glistening activity of the flight path under which Kowloon was built. It pulses with drum machine steadiness before, in its final bars, falling apart into acoustic flutter, seeming to lay bare both the teeming, kinetic menace of the city and its ramshackle nature.

“Missing”, meanwhile, elaborates on the same chord progression, ornamenting it with heavily reverbed cut ups and the occasional digital filigree. Here the dissociative, depersonalising aspects of the decrepit city are rendered as something akin to a video game score – or, indeed, as a potential soundtrack to the film version of Ludlum’s novel. Towards the end of the track, as the first side ends, the Chinese instrumentation returns, now pushed far back into the mix, reminding us precisely which city we are in.

There is a palpable sense of zooming in throughout the record. There is a feeling of edging ever closer to the heart of the city, as if pinching at a satellite map. The second side opens in more demonstrative fashion, and it is as if we are now close enough to walk on the pavements; to see the dimly neon lit shops; to have a sense of which premises might welcome us and in which we would be in danger. That sense of threat, simmering gently just above the surface, is the record’s key component, the duo having perhaps chosen to focus on the peril to which Kowloon was subjected both by the Triads and by the city’s own architecture.

Towards the end of the record, though, that sense lifts. On closer “Tai Tam Tuk” there is a feeling that we have returned to Kowloon after its demolition. Melodies float around on the peripheries of the stereo field, pushed back into the mix, as if the auditory remnants of the once bustling city. It feels elegiac; an uncanny, fug-laden eulogy for an extraordinary place now lost.