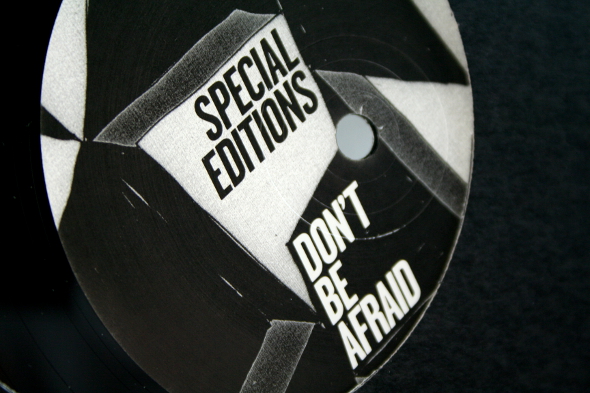 By anyone’s standards, Neville Watson has enjoyed a terrific year with his debut album, Songs to Elevate Pure Hearts on Créme Organisation, a crowning achievement. While long-established and highly regarded prior to the release of this superb debut album, his position as one of the UK’s premier makers of next-level machine music was confirmed with the full length’s woozy blend of analogue jack, synth fetishism, dreamy deepness and otherwordly melodies. This year has also seen a reissue of his brilliant, World Unknown-released “One Four Green”, and the small matter of an impressively hypnotic and atmospheric remix of Dan Beaumont’s “Reality Checkpoint” on Disco Bloodbath.

Now, he rounds off his strongest year to date with a storming EP of intense dancefloor workouts on Don’t Be Afraid, the second installment of Semtek and company’s Special Editions series. The first, from Texan analogue fetishist Disco Nihilist, remains one of the stand-out house releases of 2013 for this writer, a warm but stripped-back collection of unfussy drum machine jams that joined the dots between Chicago jack and vintage New York house, whilst thankfully steering clear of hollow revivalism.

Watson’s approach is a little different to his transatlantic predecessor. While all three tracks bear his usual hallmarks – jacking 909 drums, raging 303 tweakery and a basement-friendly vibe – there’s a booming intensity that suggests that Watson has been revisiting classic, no-holds-barred loop techno. The result is a trio of tracks that take no prisoners, but boast more than enough swing and machine funk to entice even those with a distaste for raw dancefloor music.

A-side “Crossing The I’s” sets the tone, building a gargantuan beast out of a relatively sparse selection of elements (a key facet of this kind of straight-up, floor-filling gear). From humble beginnings – classic drum machine percussion drenched in tape hiss – the track builds to a breathless, acid-laden climax. Much of the track’s power comes from the relentless, gut-wrenching pulse of bowel-bothering bass tones that could have come straight out of an early ‘90s Belgian techno record. Once the acid line and icy, drawn-out chords come in, it’s just a case of playfully alternating between percussive elements – a hissing cymbal here, a snappy snare there. Watson, ever the dancefloor scientist, gets it just right.

“Wired” is a little less intense, suggesting a desire to pep up flagging dancefloors with a slightly deeper shade of alien jack. It, too, has a touch of vintage R&S about it, with the track – an unfussy Chicago jacker with rolling percussion joining the typically robust kicks and snares – propelled forwards by a tipsy, acid-inspired riff. There are some startlingly intergalactic synth breakdowns, too, where the curious melody seems to have been sampled (or at least inspired) by a lesser-known classic. Exactly what classic this writer can’t quite figure out, but there’s a strange familiarity. Either way, it adds a cooling, out-there edge to an otherwise routine (but impressive) drum workout.

Then there’s the small matter of “Hot & Heavy”, this writer’s favourite moment. With its touchy-feely chords, techno-funk bassline and bongo-laden percussive builds, it stirs long-repressed memories of dancing all night in cold, muddy fields, and evenings spent squinting through the darkness in smoky cellars. It delivers a thrilling contrast to the other two tracks’ bare-chested, snarling intensity and proves that Watson is, at heart, a bit of softie. It’s saucer-eyed deep house for those who still get goosebumps when a DJ drops a little-known Summer of Love-era classic, but with enough percussive chops to work contemporary dancefloors. Like the rest of the EP, its unfussy simplicity is its greatest strength.