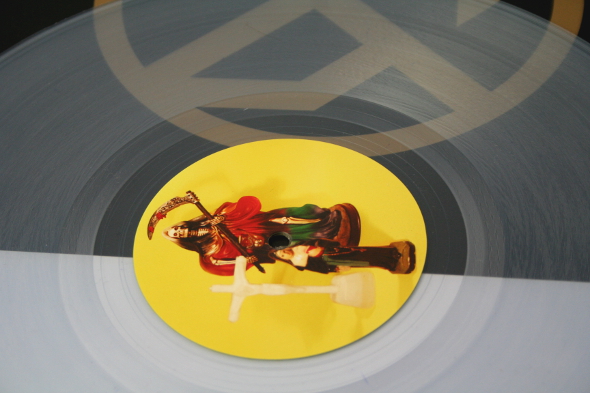 It might be considered sacrilege to some Sandwell District fans, but listening to recent mixes from Juan Mendez has left this writer with the feeling he would have been much more well equipped to provide Fabric with a truly memorable mix CD than the resultant effort from Karl O’Connor and Dave Sumner. Both the SD Radio Mix 2 from a few years ago and the more recent live recording of Mendez DJing at Honey Soundsystem have remained constant listening companions, whereas Fabric 69 has become a musical memory of 2013. Furthermore, Mendez’s own productions resonate most with this writer when he pours his undeniable love and knowledge of jagged industrial sounds and primitive electronics into the music.

The general mood that pervaded last year’s excellent Negative Fascinations informs Lust Abandon, Mendez’s solo turn on Jealous God, the best release yet from the label the Los Angeles-based artist and producer founded with James Ruskin and Karl O’Connor to sate the hunger of those suffering post-Sandwell District stress disorder. Like much of Negative Fascinations, “Lust Abandon” announces itself with an almost deathly moan from the sonic ether before launching into what can be best described as an extended exercise in codeine-addled Giallo disco.

At its core is a broken chord that palpitates with minor shifts in intensity as the track progresses, lending an anchor for you to grab to whilst Mendez utters cloaked words deep in the recesses and a procession of cinematic pads offer a glint of light. Lolloping along at roughly 115BPM, it’s weird to hear Silent Servant operate at such a relatively slow pace, but it gives him the space to let the two core elements of pads and arpeggiated chord take centre stage before the track descends back into the darkness as the run out groove swings into sight.

If Mendez’s original version is all about subtle minor shifts, the accompanying remix of “Lust Abandon” from Powell offers a complete contrast. It’s a reconfiguration that’s consistent with much of Powell’s own recent material, adding his own distinct brand of arched no wave funk which juts out at uneven angles. Mere remnants of Silent Servant’s work remain; that arpeggio that was central to the original is present here but only just, more a ghostly spectre left over with snatches of Mendez’s vocal for company as Powell’s hollowed drums rampage in unpredictable directions like an over-excited pooch. The results leave you with the feeling that few other producers sound quite like Powell.

The concepts behind Jealous God – calling their releases issues and slipping in art zines and specially tailored artefacts such as engraved logo daggers and military logo badges – has given the label the air of three techno veterans poking fun at the ‘limited edition’ marketing tool used by so many. You can’t fault the inclusion of the mix CDs however, as they have been as, if not more enjoyable listening material than the 12”s, offering a platform for some lesser known selectors to shine. Here it’s the turn of Boston DJ Jim Siegel who operates under the Ning Nong alias, and as it turns out is part of the Raspberry Bulbs group that appeared on Blackest Ever Black.

Siegel’s mix is a wonderfully jarring selection which at one point goes from the drug-addled Primal Scream classic “Higher Than The Sun” to a Ugandan Methods remix of Ancient Methods (which Boomkat memorably described as “pure darkside punishment of the variety you’ll come back to time and again like a gimp begging his mistress for a beating”) before landing on some early ’80s experimental rock from UK group This Heat. Such selections are entirely in-keeping with the contrasting nature of the Lust Abandon 12” and make for the most well-rounded release from Jealous God yet.