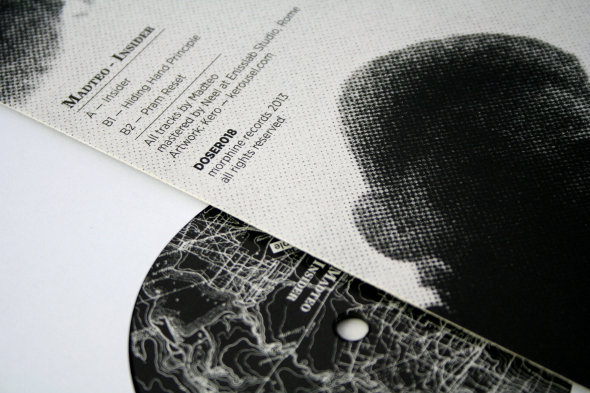 Insider marks NYC-based deconstructionist Madteo’s return to Morphine, following 2008’s Memoria and last year’s Hieroglyphic Being rework of “Freak Inspector”. Insider is also Madteo’s most abstracted work to date, but the signposts for this EP can be seen all over his previous releases. The now-you-see-it-now-you-don’t kick that flickers through Insider can be heard on so much of 2012’s Noi No; the fuggy exhalations that form the atmospheric bed of the record were one of the signal qualities of Hinge Finger’s “Bugler Gold Pt 1”. Even in “Bangin On The Ceiling”, one of a number of collaborations with Sensational, the same sense of urban derealisation can be instantly pinpointed. Perhaps the clearest comparison, though, is with Madteo’s contribution to Workshop 11, which twists 4/4 to shattering point, subsuming the kick in bandages of quivering synths that seem stimulated only by their own internal logic.

Madteo’s trajectory can be seen as one of dismantling: a process of working out which elements of house and techno need to remain, and in which distorted configuration, for the music to indeed remain house or techno. On Insider, and particularly in closing track “Pram Reset”, the producer has perhaps reached the zenith of that trajectory. Here the atmosphere and the filigree, however minimal the latter originally was, become the headline attraction, and rhythmic structure is all but abandoned. “Pram Reset” has its roots in electro-acoustic music as much as any other practice. Distorted octave swoops and melodic step changes coalesce into a miasmic drizzle punctuated by a single, beautiful, repeated chord. Synthesisers wobble unnaturally, sometimes thrust into the centre of the mix and at others fading, falteringly, into the background. It is a stunning piece of music that ranks easily amongst Madteo’s best work.

Opener “Insider” is an altogether more upbeat affair, with springing pings falling over themselves to form melodies just out of reach – a recurring one of which sounds dangerously like “The Birdie Song”. Although there is a rhythm section here it is certainly not the pivot around which the track moves. Instead “Insider” is propelled by the forward motion of its melodies, each of which constantly threatens to tip over into some irrevocable downhill slide. “The Hiding Hand Principle” has that similar barely-there kick drum, thudding softly away as if buried under pillows. The track is built around a single, woodblock-esque note that shifts restlessly between rhythmic figures, while a baritone vocal sample incants incoherently from the bottom of a particularly dingy well. There is no melodic progression here, the entire track consisting of that one note, and yet there is so much data to process that, on close listening, it seems overwhelming. The degree to which the lead line shifts from bar to bar; the occasional shifts in the bass, one of which sounds briefly and exactly like a didgeridoo; the relentless, piercing high frequency – it is all utterly gripping.

Morphine is the perfect home for Insider. The record should be shelved next to Morphosis’ superlative Dismantle/Music For Vampyr, both records freewheeling ominously past you on their route to lord knows where. Insider is truly excellent: perhaps the most exciting record in Madteo’s enviable discography, and a clear signal that abstraction is the right direction of travel for the Queens-based producer.