Hotline Recordings return with 12″ from Rachael 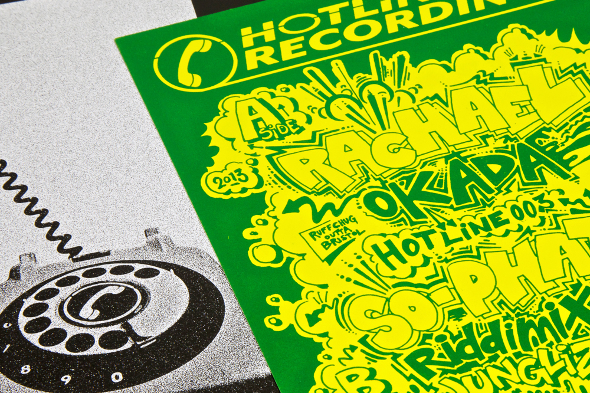 Watch a video teaser for the third release from the mysterious Bristol label which features a refix from DJ Sotofett in 150BPM mode.

Launched last year with the guttural double drop of dancehall-inflected grime that was Kahn & Neek’s Backchat 12″, Hotline Recordings’ whole aesthetic was in thrall to the pre-internet age of partying, where dialling up a voicemail number printed on a flyer was your route to acquiring directions. The process of dialling a phone number to hear just about aubible previews of Hotline releases has stood out when the majority of labels and artists seem quite happy to rely on a two minute Soundcloud preview to whip up expectation.

Having dabbled in some uncompromising 175BPM halfstep from Lurka earlier this year, Hotline Recordings will slip out a third release next week which sees the return of the mysterious producer known only as Rachael, last seen on an underrated Idle Hands plate in 2012. “Okada” is described as “the product of late nights and full ashtrays” by Hotline, and it gets a self styled ‘SO-PHAT Riddimix Is Junglized’ remix from Sex Tags lynchpin DJ Sotofett. Allegedly submitted via DAT tape, Sotofett also delivered one of his trademark graf-style flyers which has been reprinted for inclusion as a two colour insert for the record.